Wrestling For My Life: The Legend, The Reality, and The Faith of a WWE Superstar, by Shawn Michaels and David Thomas 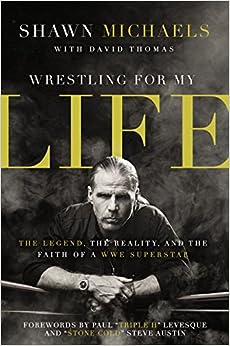 Legendary WWE Superstar Shawn Michaels returns with his second memoir, and gets more personal this time....

Nine years after his first memoir, HEARTBREAK & TRIUMPH: THE SHAWN MICHAELS STORY, The Heartbreak Kid returns with WRESTLING FOR MY LIFE: THE LEGEND, THE REALITY, AND THE FAITH OF A WWE SUPERSTAR. Written with David Thomas, this slim, quick read delves into Shawn's more recent career in WWE, including his retirement match against The Undertaker. His in-ring exploits take a back seat to his religious belief, and the bulk of the book is devoted to his (Relatively) newfound faith.

Shawn's religious belief was touched upon in his first book, and, to be perfectly honest, I took it all with a grain of salt when I read it years ago. I've been an on-again/off-again wrestling fan since I was 15, so I look at everything that happens to a professional wrestler, both in and out of the ring, with a cynical eye. Shawn had a reputation as being not-the-nicest-guy during the earlier parts of his career, so when I read about his newfound faith, and when I saw him talk about it on TV, I assumed it was, partially or wholly, part of the show.

I'm happy to see that it doesn't appear to have been a work. Michaels and Thomas detail the struggles that led to Michaels conversion to a man of faith, and it seems to have made a world of difference in both his personal and professional lives. He speaks candidly about his marriage and his relationship with his children, and he comes across as a truly changed, happy man.

There isn't a whole lot of wrestling lore to be found in this book, but I found it extremely enjoyable, nonetheless. I don't consider myself to be a very religious person, but Michaels never comes across as preachy or overzealous. This is an intelligent and well-written book, and it did my heart good to see how much Shawn Michaels has changed for the better.


Posted by The Crabby Reviewer at 7:08 PM