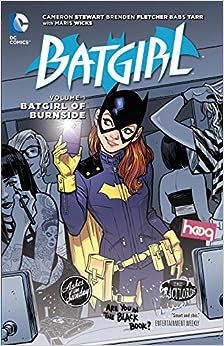 I was honestly expecting this latest iteration of Batgirl to be a wiping clean of the slate, and geared to pre-teen girls....I was surprised to find that it's anything BUT that. In fact, while it does send Barbara (Batgirl) Gordon off in an entirely new direction, writers Cameron Stewart and Brenden Fletcher are very respectful of what has gone before, giving the Gail Simone "New 52" era a nice little wrap-up, and keeping Barbara's now-former roommate a part of the picture, albeit a distantly removed one.

BATGIRL, VOLUME 1: BATGIRL OF BURNSIDE finds Barbara back in school and living in Burnside, which I assume is a Gotham suburb/neighbor city. (Either it was never made clear, or my aging brain has already forgotten it....) What I enjoyed most about this new Batgirl is the fact that it respects what has come before. Stewart and Fletcher acknowledge that Barbara was Batgirl as a teen-ager, and deal with her crippling at the hands of The Joker, and give me an explanation for why she's walking, and swinging from rooftops, again. (This may very well have been dealt with in Gail Simone's BATGIRL run, but I dropped that series after Volume 4, precisely because she was dragging out the "How can Barbara walk again?" mystery far too long. That, and the book was just plain bad.) They even throw in references to Barbara's stint as Oracle, although she is never specifically referenced by that name. They do, however, reunite Barbara with her Birds of Prey partner Black Canary, portrayed here as a crabby early-twenty something.

The art, by Babs Tarr, is wonderfully suited to the character and her new fun-to-read vibe. Barbara is portrayed as a smart, capable young woman, and I especially enjoyed how Tarr depicts Barbara's eidetic memory visually. I hope to see more of that in future issues.

I have a twelve year-old daughter, and I cannot imagine giving her any of the comics that are being produced by Marvel and DC these days. I've managed to get her interested in reading comics, but she reads mostly MY LITTLE PONY and an ARCHIE here and there. She has no interest in super-heroes, and there's not much I can do about that, thanks to the stuff that the big two are currently producing. DC's "New 52" WONDER WOMAN book by Azzarello has been fantastic, but it's hardly appropriate for her age group, and there really aren't that many super-hero books that would appeal to a 12 year-old girl. I can totally see her loving this book. I will not, however, be giving her a copy, because the first few issues are a little too filled with binge-drinking, hangovers, and references to bi-sexuality, all of which I found odd in a book that is so clearly being aimed at young girls. (Unless DC is really targeting college-age girls.) There's also a transgender villain, which caused a big outcry on the internet, home of butt-hurt, outraged babies who complain about everything. None of these are necessarily bad things, but they cost DC a sure sale, since I would have totally picked up a hard copy of this for my little girl otherwise.

This is, though, a FUN book.

You know, that thing that has been missing from the doom-and-gloom DC since Geoff Johns and Dan Didio took over? The book gets into slightly heavier territory towards the end, but nothing that involves severed limbs or blood and gore, which was a nice surprise from DC. Maybe there's hope for them yet.


BATGIRL, VOLUME 1: BATGIRL OF BURNSIDE collects BATGIRL #'s 35-40 (Kudos to DC for not renumbering and starting from another freakin' #1!) and SECRET ORIGINS #10, and includes all covers and a substantial gallery of sketches and concept art. Fun stuff. I had a good time reading this book, and I hope the creative team sticks around. (By the way, DC is releasing this book in hardcover and paperback on the same day.....I hope this experiment succeeds. I really like the concept of readers being able to pick the format they prefer.)

Posted by The Crabby Reviewer at 6:03 PM