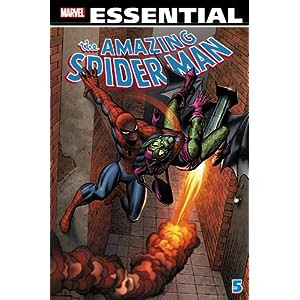 
This volume starts off with a bang, opening smack-dab in the middle of a battle between Spidey and Doc Ock, which results in the death of a supporting cast member. (I know Spidey is already wracked with guilt over every stubbed toe and ingrown hair that anyone even remotely associated with him suffers, but this character's death really IS Spidey's fault. I was shocked to feel that way, but it seemed pretty cut-and-dried.....) From there, we get crooked politicians, a battle with Iceman, clashes with The Prowler, random terrorists, and The Green Goblin, an appearance by Johnny Carson and Ed McMahon (!!!), and a truly bizarre story that finds Spidey growing four extra arms and duking it out with The Lizard and Morbius (Making his first appearance.). If you thought the Roy Thomas-scripted extra arms story was weird, the following Thomas two-parter takes the cake as potentially THE most bizarre, out-of-place story ever told in a Spider-Man mag: J. Jonah Jameson, publisher of The Daily Bugle, mounts an expedition to The Savage Land, in search of a mysterious giant monster that destroyed a scientific expedition's camp in Antarctica. Along for the ride....a surviving witness to the Antarctic attack, a helicopter pilot, photographer Peter Parker (A.K.A. The Amazing Spider-Man!), and his girlfriend Gwen Stacy, who will pose for those important circulation-boosting cheesecake photos during lulls in the monster-hunting. They do find their monster, a massive alien being named Gog, fully-clothed, in the mighty Marvel tradition of Lee/Kirby/Ditko monsters, and under the control of Kraven The Humter. We get the obligatory appearance of Ka-Zar, Lord of The Savage Land, along with his sidekick Zabu, appearances by various and sundry dinosaurs, people getting stuck in quicksand, monsters getting stuck in quicksand, monster-on-monster action, and there's even a touching moment or two when Jameson thinks Parker is dead, and actually behaves like a human being for once.Truly bizarre stuff....I read this story arc in MARVEL TALES when I was a kid, and it's lived on in my memory for decades now. It was a hoot to read it again.

It wouldn't be 1970's Marvel without social relevancy, and this volume has it in spades. First off, we have the historic drug abuse issues, which were printed without the Comics Code seal of approval. (I thought it was hilarious how Gil Kane drew the dapper, suit-wearing drug dealer to look almost exactly like Stan Lee...) From there we have pleas for equal rights, better conditions for prisoners, and a truly prescient story arc about police and government surveillance and the erosion of our privacy. Considering the fact that these stories are over 45 years old, Stan Lee comes off looking like a modern-day Nostradamus....

Special mention must be made of a two-parter near the end of the book, which features the first appearance of The Gibbon, a character that has, for some unknown reason, been near and dear to me since I first encountered him in third grade, reading this very story arc in the pages of MARVEL TALES. I don't know if it was the character, a poor, downtrodden everyman with a face only a mother could love and the agility of his namesake monkey, or the staggeringly perfect art by John Romita...whatever it was, this story just clicked
with me, and it's been a favorite ever since...it was wonderful to revisit it again, and rediscover the hidden gem that is...THE GIBBON!

The book is rounded out by a small selection of Gil Kane's original art from various issues, and his work, if possible, looks even better in it's raw form.

Aside from the Lee/Ditko Spider-Man stories, this is volume is the most fun I've had during my epic re-reading of the chronological Spidey. Great stuff, and it ends on a cliffhanger that introduces another childhood favorite of mine...Hammerhead! Bring on Volume 6!

Posted by The Crabby Reviewer at 2:59 PM