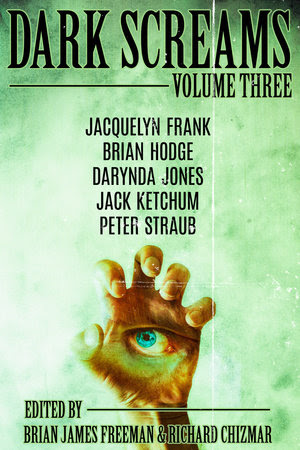 The digital horror series continues, with DARK SCREAMS, VOLUME THREE.....
This volume was a marked improvement on Volume Two, and editors Richard Chizmar and Brian James Freeman have an eclectic lineup this time out, with authors ranging from legendary to unknown.

The anthology starts out with Peter Straub's THE COLLECTED STORIES OF FREDDIE PROTHERO. This is my third go-round with this story, which was originally presented in Cemetery Dance's TURN DOWN THE LIGHTS anthology. The first reading presented me with an impenetrable yet creepy story. The second reading left me searching for clues that were scattered around like bread crumbs, yet still proved frustrating. This third reading left me feeling pretty much like a dullard, because there are clearly big ambitions on display in this story, but the point, if any, keeps going right over my head. The story is presented as a collecting of tales penned by a child prodigy, from his early years through his mysterious disappearance. The "collection" has been curated and introduced by Torless Magnussen, who scatters tidbits about Freddie's neglected, possibly abusive childhood, and its fascinating, gripping stuff. However, the presentation ends with the collected stories themselves, with all of the background material presented beforehand, and it raises way more questions than it answers. Smarter men than I will probably get more out of this than I did. All this story did, in the end, was prove to me that I'm better off not reading any more Straub.

Next up is Jack Ketchum's GROUP OF THIRTY, a slight, uneventful story about a horror writer in his twilight years, who decides to accept an invitation to speak at a gathering of science-fiction fans. Ketchum always delivers a good read, but this one seemed kind of pointless to me.

I've never heard of Darynda Jones before, and I have no idea how she managed to get a story in such a high-profile anthology, but I'm glad that she managed it. Her story, NANCY, was a fun little mixture of Nancy Drew and Hemlock Grove, as the new girl in school explores her creepy new town, supposedly the most-haunted place in America. I'd love to see more from Jones, especially if she chooses to write further tales about these characters and their town.

I LOVE YOU, CHARLIE PEARSON, by Jacquelyn Frank, is a twisty little tale of teenage love and obsession. I've never read any of Frank's work, but this was a well-done story, and I'll keep my eyes open for more by her in the future.

The book closes with Brian Hodge's THE LONE ONE AND LEVEL SANDS STRETCH FAR AWAY, a title that I don't fully understand (It may be a typo, for all I know...), but Hodge is a master of the short story form, and his tale of a marriage disrupted by a new neighbor is wonderfully told, with characters that resonate with the reader long after the final page is turned. Not really a horror story, but unsettling enough to pass as one.

This has been a mixed bag of a series so far, but the hits have outweighed the misses thus far. I'm wrapping up the fourth volume right now, and it's even stronger than this volume. Chizmar and Freeman have done a wonderful job with their story picks thus far.


Posted by The Crabby Reviewer at 4:49 PM