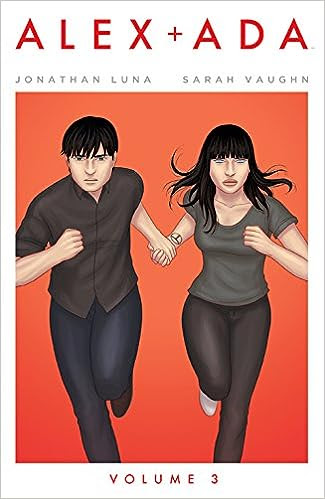 
Volume 2 ended with Ada nearly being caught by the police and outed as a sentient, and volume 3 picks up with Alex and Ada trying to decide if  it's better to live their lives out in hiding, or stay in plain sight with Ada pretending to be a normal robot. With the government in full-assault-mode on sentients and their owners, the pair soon find the choice taken out of their hands, as events spiral out of their control, and their secret is made public knowledge.


I had no idea that this was a finite series, but, as bummed as I was to see such a wonderful, thought-provoking story come to an end, I was also happy that it would, hopefully, end on a high note and not overstay it's welcome, a fate that has befallen far too many other properties that I once enjoyed. I'm happy to say that the team of Sarah Vaughn and Jonathan Luna brought the series to an entirely satisfying conclusion, filling the last collection with more depth, emotion, and oomph than I dared to hope for. Great endings don't come along nearly often enough, and this does qualify as a great one. I can't recommend the entire series highly enough. Hopefully, Image Comics will issue an omnibus edition, so the entire story can be collected in one book.