Superman: The Men of Tomorrow


They dropped the numbering on the trades already...? 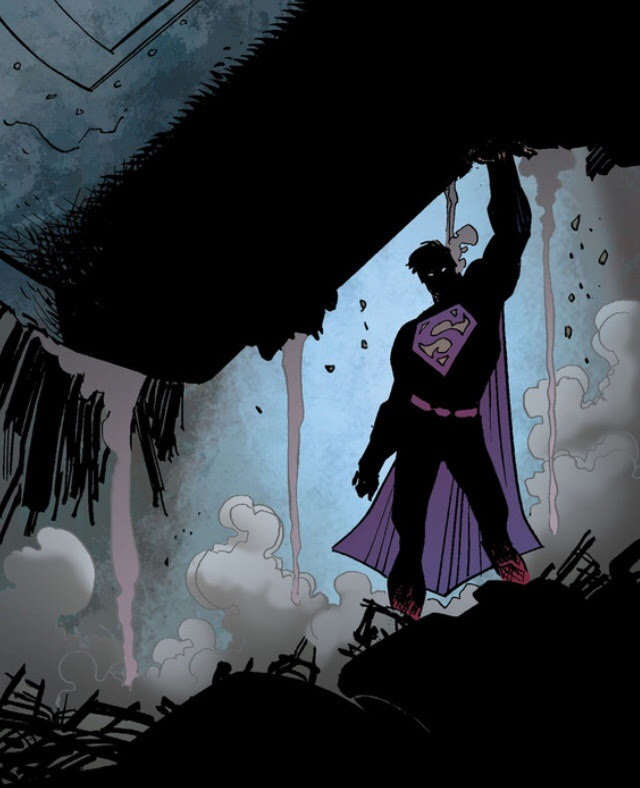 I have no idea what volume of "New 52" SUPERMAN this would be, but it doesn't matter, because DC seems to have dropped the numbering as of this collection. Which is odd, because this hardly seems like it was meant to be a standalone volume....it ends on a cliffhangery kind of note, which would have led me to suspect that they'd be numbering this as Volume 1 of the Geoff Johns/John Romita Jr. SUPERMAN, but....no. No number. Odd. Odder still that I just wasted a whole paragraph talking about something that only the anal-retentive will care about. Still, all I can think about is how difficult it must be for people just getting into comics (HAAA HAAA HAAAAA! Like anyone new gets into comics!) to find out which issues go together, which trades to read, etc., in this crossover-obsessed, reboot-happy, renumbering every year or two era we live in. Yes, I know, STFU and review the book!

I'm always up for a Geoff Johns book. While the majority of "The New 52" has been a complete failure for me, Geoff Johns always entertains. Not everything he does is a home run, but there's usually something good there to justify picking up his books. This time out, Johns returns to SUPERMAN, along with lifelong Marvelite John Romita, Jr. This is JRJR's first work for DC, and he does a decent job of it, ably abetted by inker Klaus Janson. (It's an understatment to say that JRJR's art has declined terribly since his early days at Marvel, penciling IRON MAN, THE AMAZING SPIDER-MAN, and THE UNCANNY X-MEN. His faces all look the same, male and female...they all look like Italian boxers. His figures are distorted and take weird shapes, his fingers are long and weird, everything is thick and blocky....I like his art less and less with each new go-round. Your mileage will surely vary, depending on your tolerance of his artwork.)

The story of SUPERMAN: THE MEN OF TOMORROW is almost an inversion of the story of Superman himself: Scientists in a top-secret project headquarters, believing Earth is doomed, send their only son off into "The Fourth Dimension", to a peaceful planet that knows ho fear, hatred, or war. Flash forward twenty-five years, and the boy returns to Earth, complete with super-powers of his own. Ulysses, as he comes to be known, is devastated to find that Earth still exists, and that his birth parents are still alive. Ulysses is taken under the wing of Superman, and begins to explore the planet of his birth, and is shocked by the inhumanity and cruelty he discovers along the way. He decides that there is no saving the people of Earth from themselves, so he comes up with a better solution: He will transport six million humans to his adopted homeworld and help them to live a better life.


Anyone who has ever read any kind of science-fiction story, or any comic book, will know immediately that there is much more to Ulysses than meets the eye, so the end of the arc shouldn't come as much of a surprise to anyone.What did surprise me, however, is the issue that followed the main storyline: A beautifully written piece that lets the audience in on what it means to be Superman, and what motivates him. That quiet, down-to-earth story is worth the price of admission alone, and Johns knocks it out of the park. The main story has some nice character bits, and some great interplay between Superman and Ulysses, but the bulk of the arc is filled with distracting red herrings and bits and pieces that I assume will play into future volumes...In reality, this could have been a much shorter arc, and missed nothing of any real importance.

SUPERMAN: THE MEN OF TOMORROW collects SUPERMAN #'s 32-39, complete with all covers and variants (An assload of variants, none of which have anything at all to do with the actual contents of the issue they're representing.), as well as some behind-the-scenes stuff from Johns and Romita, Jr. As I said, a lot of this has a "Been there, done that" feel to it, but it's still slickly executed stuff, and worth a look, especially the last chapter.


Posted by The Crabby Reviewer at 8:53 PM