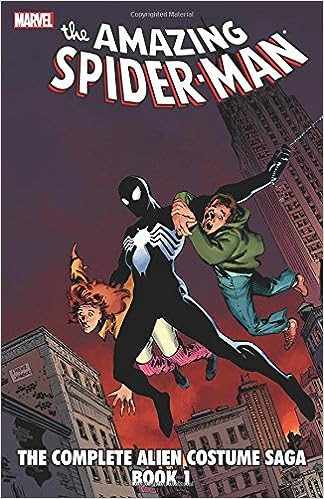 As my marathon re-reading of THE AMAZING SPIDER-MAN nears its (temporary...) conclusion, I finally reach what was a turning point in my years as a fan.....The Black Costume saga!!!!

I have vivid memories of sitting in the auditorium of P.S. 127 in The Bronx, swapping theories with fellow Marvel maniacs about just what this upcoming "SECRET WARS" mini-series would mean to the Marvel Universe in general, and to us in particular. It was going to go on for a year...did that mean that Marvel would cancel all of it's books while the heroes and villains were off in space fighting? If not, how could the books continue without spoiling the end of the mini-series? Who kidnapped the heroes? What would happen to people like Daredevil, who would be left to police the virtually hero-free New York City? And did you hear that Spidey was going to be getting a new costume...? Sacrilege! Until one of my fellow geeks reached into his bookbag and pulled out a copy of MARVEL AGE #12, which had sketches of the new duds...and we were all dumbstruck. Sleek, dangerous-looking, mysterious...this was a Spider-Man we could all heartily get behind! THE AMAZING SPIDER-MAN was coming off of a legendary run by Roger Stern and John Romita Jr., and we were all excited to see where the new team of Tom DeFalco and Ron Frenz would take the web-slinger.

Unfortunately, it was also a time of great turmoil in my personal life, and I found myself without the money, or time, to really keep up with my favorite comics anymore. I still dropped in occasionally, but I was out of hardcore collecting for the next five or six years.

Luckily, Marvel has brought virtually all of my childhood favorites back into print over the past few years, so it's been a golden opportunity for me to dive back into well-loved storylines, as well as ones that I either never got to experience the first time around, or only enjoyed bits and pieces of, thanks to lack of funds and/or spotty newsstand availability. (The was before my neighborhood was blessed with a comic-book shop of our own, when the direct-market was still in it;s infancy.)

THE AMAZING SPIDER-MAN: THE COMPLETE ALIEN COSTUME SAGA, BOOK 1 confirms my belief that Marvel has, hands-down, THE best reprint team EVER....The book collects THE AMAZING SPIDER-MAN #'s 252-258, MARVEL TEAM-UP #'s 141-145 and Annual #7, and PETER PARKER, THE SPECTACULAR SPIDER-MAN #'s 90-95, as well as material from MARVEL SUPER-HEROES SECRET WARS #'s 8-9 & 12. Not only did Marvel take the time to include anything you'd need to know from SECRET WARS, but they also, painstakingly, took care to present the collected issues in the most logical and chronological reading order. There were a few times when I thought I had them, and they put an issue out of order, but those thoughts were always squelched when, after a few more pages, I would read something that made me realize just why the issue in question was placed where it was. My hat is off to the collected editions team, and to the staff that was running the show in 1984, as well....They did an amazing, pun intended, job of keeping the continuity between the three regular SPIDER-MAN books incredibly tight, which can't have been an easy task.

As for the issues themselves...? They're kind of a mixed-bag. I really enjoyed the AMAZING SPIDER-MAN issues, especially once the team of Tom DeFalco and Ron Frenz really find their groove. MARVEL TEAM-UP was really running out of gas at this point, and would be canceled and replaced by WEB OF SPIDER-MAN with the year, and rightfully so. It had run its course, as shown by the lackluster issues collected here. (I did enjoy the totally gonzo MARVEL TEAM-UP ANNUAL #7, which finds Spider and Alpha Flight taken by The Collector, and forced to battle their way through his entire collection in order to free themselves.)

The remainder of the book is devoted to PETER PARKER, THE SPECTACULAR SPIDER-MAN, written and illustrated by Al Milgrom. I was a HUGE fan of Milgrom's work when I was a kid, and I was amazed to see how much internet hate the man's art from that era gets these days. Maybe it was nostalgia, but I thought his work held up very well. His figures can be a bit stiff and awkward at times, but I appreciate his storytelling ability, and I still consider myself a fan. I especially enjoyed his depiction of a grief-stricken Blob's rampage through Manhattan. He managed to give depth and character to what had always been a throwaway bad-guy.

Overall, this is a solid collection, running a beefy 488 pages, complete with all covers, a SECRET WARS recap page, an afterword by Jim Salicrup, and a host of related trade paperback and MARVEL TALES covers. There's also a small selection of original art, as well as the aforementioned MARVEL AGE article and artwork. I really enjoyed this book, and I'm looking forward to diving into the conclusion of the alien costume storyline.

That said, I just noticed that this book cost a staggering $44.99....wow. DC Comics just published a substantially larger hardcover omnibus of Walter Simonson's ORION for $75.00....Is there ANY compelling reason why a trade paperback should cost 45 bucks...? Sheesh. Thank God for InStock Trades, which had this for 52% off. Never pay full price!

Posted by The Crabby Reviewer at 10:34 AM