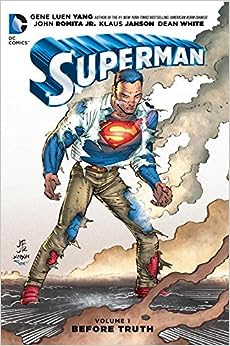 Honestly, I feel bad for future generations of fans who will have to seek out back issues from our era of comics. If someone recommends "Superman, Volume 1", how in the hell will they know WHICH Volume 1....? Back when Image Comics first started, my Aunt Debbie was taking a trip out to a store in the boondocks, and she asked me if there was anything I needed from there. The store was right next to a comic shop, so I asked her if she could go in and pick me up a copy of SHADOWHAWK #1. I meant the newly-released SHADOWHAWK volume 2 #1, so when she showed up later with the wrong book (She bought volume 1's #1...) and I told her that it was the wrong one (Bad move...), she bopped me over the head with it, cursed me out, and told me to pay her back. In my opinion, the sheer mass of "Superman, Volume 1" collections out there are just a headache waiting to happen, and this constant renumbering is almost certainly keeping potential new readers away, because potential new readers wouldn't have a freaking clue where to start reading. Just my opinion.....

Anyway, we're starting over with a new writer, Gene Luen Yang, picking up where Geoff Johns' aborted run ended. Yang gets off to a rollicking start with an issue that was probably the most fun I've had with a DC book since "The New 52" began years ago. Superman and his fellow Justice League members are exploring the limits of his new "Flare" power, and Yang delivers an issue filled with teammates joking, having fun, and being human, Batman included. Yang's Batman (Gasp!) smiles, cracks jokes, and acts like...wait for it...a friend to the people that he works with. This issue was a blast to read, and I'd buy more like this in a heartbeat.

The rest of the collection, however....

The meat of SUPERMAN, VOLUME 1: BEFORE TRUTH concerns Superman's identity as Clark Kent being revealed to the world by Lois Lane. This comes about thanks to a group known as "Hordr", who are the ones that actually discover Clark's secret. Lois reveals Superman's identity to the world to stop Hordr from using the secret as leverage against him, so....she thinks she's doing a good thing, but it comes off as kind of thoughtless and jerkish.

Hordr is, even by comic-book standards, waaaaay too over-the-top for me to suspend my disbelief. They have a secret headquarters in a cloud, they get their operatives up there via flying city buses, and they have dissolving ninjas in their employ. (I assume this was a tip of the hat to Frank Miller's DAREDEVIL foes, The Hand, but it just didn't fit a Superman comic.) Hordr seemed to be a maguffin, there only to move us to the salient plot point of the identity reveal, but the ending teases that there's more to them than meets the eye, so I assume they'll be back. I hope Yang makes them a bit more interesting, and believable, next time out.

Based on the first chapter of the book, I assumed that Yang's strong suit would be characterization, but Superman and his supporting cast are all a bit...off. Superman himself seems like a jerk for much of the book, acting like a petulant child after he's outed, and Lois Lane and Perry White behave like a couple of pricks. Clark Kent has basically just had his entire life ruined by Lois Lane, so what does his boss and friend Perry White do...? SMACK HIM AND CALL HIM OUT FOR LYING TO THEM ABOUT HIS IDENTITY!!!! None of the supporting cast act in character, and that really took me out of the book.

I also wasn't too enamored of Superman's new power, which renders him powerless every time he uses it, as it seems to be no more than an excuse to have a powered-down hero who is more vulnerable to his foes. Also, after Superman's identity is revealed to the world, The Royal Flush Gang goes looking for Clark Kent, and finds him WALKING DOWN THE STREET NEAR HIS HOUSE, like nothing happened!!! Where were the throngs of people mobbing him, why was no one crowding the street in front of his apartment, where were all of the villains seeking revenge...? Nope, the secret gets out, and life goes on as usual...very sloppy stuff. I think Yang could do some great work, if he were given a little more editorial input as far as staying in character, but since DC is heading towards another reboot, I assume the next Yang volume will be the last, and the identity reveal will be retconned out of existence.

The art for this volume is provided by John Romita, Jr. and Klaus Janson. I used to be a massive JRJR fan, but his work has been getting increasingly blockier and sketchlike, and the art in this volume pretty much left me cold. Romita seems much more at home at Marvel, and I think he's more suited to their characters and storytelling style.

SUPERMAN, VOLUME 1: BEFORE TRUTH collects SUPERMAN #'s 40-44 and the short story from DIVERGENCE: FCBD SPECIAL EDITION #1, including all covers and variants.


Posted by The Crabby Reviewer at 3:53 PM