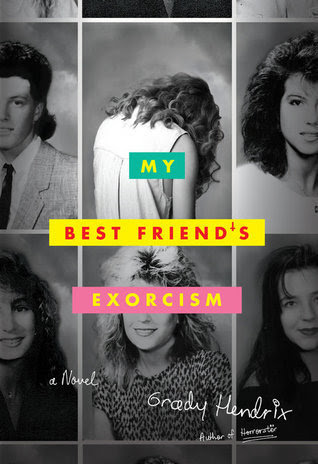 I was a bit unsure about this book, for a couple of reasons. Specifically, the cover and protagonists (A pair of high-school girls) made me wonder if I was going to (****shudder****) inadvertently crack open a girl-centric faux-horror YA novel. The good news is, this is not being marketed as a YA novel, and this is, I'm happy to say, a full-on, pull-no-punches HORROR novel.

The book itself is designed to resemble the 1988-1989 Albemarle Academy of South Carolina Yearbook, and it's a clever little conceit. The first few pages, as well as the last few, are filled with signatures and well-wishes from fellow students, as well as the customary ads from local businesses and salutations from parents and teachers. The design really sets the mood, and is very unique.

The story itself follows Abby and Gretchen, longtime best friends whose lives will be forever changed before the school year ends. Gretchen is from a rich, religious, and eccentric southern family, while Abby's family has fallen on hard times recently, relegating Abby to the proverbial "Wrong side of the tracks". Abby is attending the Ablemarle Academy on a scholarship, so she's one of the few students who isn't rolling in money. The bulk of the first half of the book is spent setting up the relationship between Abby and Gretchen, which author Grady Hendrix does wonderfully. Without a solid foundation in reality, and believable characters, nothing that follows would have any impact at all.

One fall evening, while visiting with friends, Gretchen and Abby experiment with LSD, which ends with the girls going for a midnight swim, and Gretchen disappears under the water and never resurfaces. The girls frantically search the water and nearby woods unsuccessfully, until they stumble upon her the next morning, naked and freezing.

Physically, Gretchen turns out to be fine, but Abby soon starts to notice cracks in the facade.....Strange things begin to happen that make her wonder if something in the woods that night changed Gretchen somehow. Could her best friend be possessed by Satan...?

As someone who was roughly the same age in 1988 as Abby and Gretchen, I thoroughly enjoyed Hendrix's pop-culture references, especially the way that every chapter bears the name of, and is patterned after, a late '80's hit song. The progression of off-kilter events that follow Gretchen goes from kind-of-weird to downright scary in short order, and Hendrix accomplishes a nice bit of slight-of-hand by keeping me wondering until the end just what was going on....Is Gretchen really possessed, or is the stressed and now-friendless Abby twisting the narrative to match her perhaps mentally ill version of events? This is good, strong stuff that, while never really scaring me, really drew me in and kept me turning the pages. As always, your mileage may vary, but this book really hit my Horror sweet spot in a way that hasn't been hit in a LONG time. Highly recommended.


Posted by The Crabby Reviewer at 4:22 PM