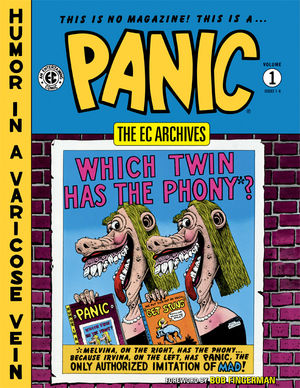 Dark Horse does it again....

I've been an EC fanatic ever since I was a VERY little kid. I received a copy of Les Daniels' COMIX! A HISTORY OF COMIC BOOKS IN AMERICA when I was seven or eight years old, and there were a few EC Horror reprints collected in it, as well as a history of the rise and fall of the legendary publisher. Unfortunately, the late '70's weren't the best of times to discover a long-defunct line of comics.

As I've grown older, that situation has changed dramatically....almost everything ever published has become available again in the intervening decades, and I've tried to take advantage of this bounty, at least to the best of my limited budget. Fantagraphics has been doing some great artist-centric EC collections, and Dark Horse has been continuing their full-color line of EC ARCHIVES, which brings us to this volume, THE EC ARCHIVES: PANIC, VOLUME 1.

We're all familiar with MAD, but PANIC is something new to me. I'm sure I've seen reprints of it at some point in the past, but I've never taken the plunge and read it until now. As always, Dark Horse goes above and beyond in delivering a beautiful product. This meticulously recolored volume collects the first six issues of PANIC, and features a new foreword by Bob Fingerman.

These books were originally published over sixty years ago, and they're very much the product of their time...topical humor abounds, and there were parts that went straight over my 45-year-old head. I was surprised to find myself laughing out loud frequently, however, as I got further and further into the book. There's some pretty subversive stuff here, which really stands out in the overly politically correct 2016. There's jokes and visual depictions of wife-beating, parents killing their children, bitingly sharp deconstructions of movies and TV shows, commentary on gender roles....I imagine that this was pretty heady stuff back in 1954. (One perfect example that had me hysterical was a spoof of the old Charles Atlas ads, here known as "Charles Fatless", which finds the newly pumped-up nerd returning to the beach for revenge, only to brutally knock out his former girlfriend, then take off with his musclebound tormentor for a workout session. Punching a woman....? That would never go over today.) Even when I wasn't laughing, I was awestruck by the wit and the balls of contributors Al Feldstein, Wally Wood, Will Elder, Jack Davis, Jack Kamen, Basil Wolverton, and Joe Orlando. The book has been completely recolored using Marie Severin's original colors as a guide, and I thought it looked absolutely beautiful...the colors pop, and accentuate the exquisite linework of masters like Jack Davis perfectly. (I know that recolored comics are a VERY touchy subject, so your mileage may vary. Personally, I thought that Dark Horse did a great, respectful job here.)

This collection is worth reading as a slice of history (There's a vintage subscription ad that actually finds EC accusing those who were trying to censor comics of being communists themselves, or tools of communism....), but the spectacular art and the biting satire hold up extremely well after six decades plus. Highly recommended stuff.


Posted by The Crabby Reviewer at 1:04 PM