The Avengers, illustrated by George Perez AND John Byrne....It doesn't get any better than that.

(I already covered a few of the issues in this collection in my review of the
MARVEL UNIVERSE BY JOHN BYRNE OMNIBUS
so I won't get too in-depth on those.)

THE AVENGERS: HEART OF STONE collects AVENGERS ANNUAL #9 and AVENGERS #'s 188-196. The book kicks off AVENGERS #188, which was covered in the Byrne Omnibus, but then moves on to a story that I read so many times as a kid that the issue literally fell apart: AVENGERS ANNUAL #9. I can't say why this story gripped me so as an eight-year-old, but it was an issue that I returned to again and again for years. The story is a continuation from IRON MAN #114, which I have never read, but it's a fairly self-contained tale that finds The Avengers attacked from within the walls of their own mansion by Arsenal, a WWII-era android that has close ties to one of The Avengers. Writer Bill Mantlo handles the emotional aspect of the story wonderfully, and the bone-crushing action is beautifully rendered by the great Don Newton.

The next three issues, featuring Deathbird and The Grey Gargoyle, are also covered in the Byrne review, but from there we move on to a two-parter that pits The Avengers against a murdered steel-mill worker who returns for revenge against the co-workers who killed him as a molten giant. The first part of this story features a line that I have repeated, over and over, for nearly thirty years. I nearly burst a blood vessel when I happened across it in this collection, as it's origin had long since slipped my mind. A steel-mill worker gets his foot caught in the tread of a fifty-ton press, and as he screams for help, his co-worker, running from a deluge of molten steel, screams back to him the immortal line:
"Hep yo'seff, suckuh!"
Gotta love middle-aged writers trying to do street lingo.
The Avengers manage to see that justice is served to the guilty parties in the second part, which features a beautiful Frank Miller cover. 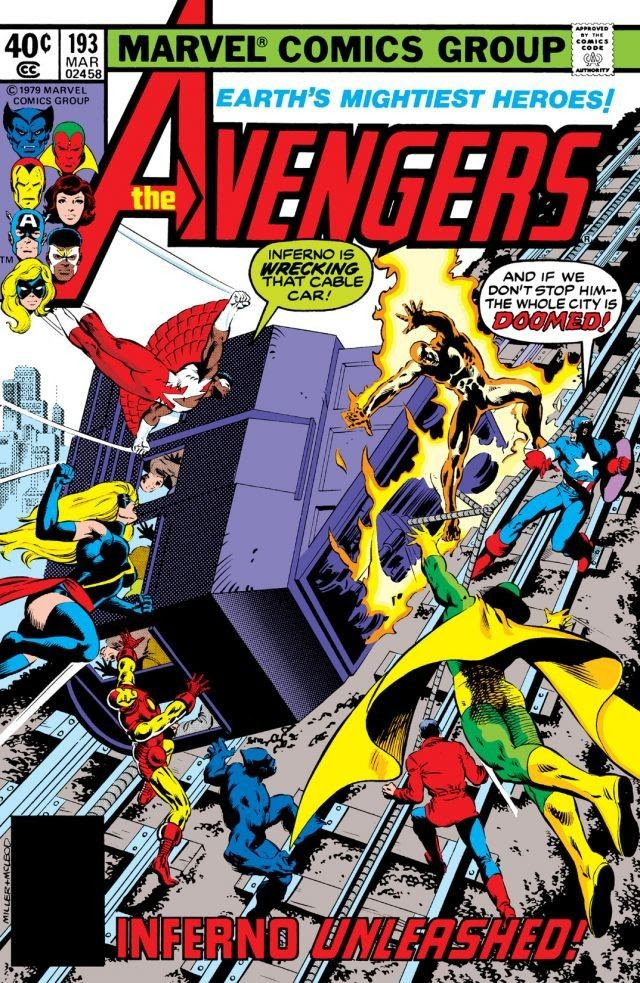 Issue #194 is a lovingly crafted issue that you would never see these days: A quiet breather that allows the reader to catch up with the personal lives of the team members. We see Wonder Man rejoin the team, watch Captain America and Ms. Marvel take a walk through the wintry landscape of the mansion's grounds, witness The Vision bonding with Jocasta, learn about Wonder Man's new showbiz gig, and meet an unusual visitor who will propel the team into their next mission...

....where they face The Taskmaster, making his first appearance. The Taskmaster is one of my all-time favorite Marvel villains, and it's a real treat to see him in action here against The Avengers, Yellowjacket, and Ant-Man, as the team stumbles across his super-villain flunky training school. (Which is such an amazing concept....)

The collection is rounded out by the cover and Tom Brevoort's introduction to AVENGERS VISIONARIES: GEORGE PEREZ, and a selection of full-page original art reproductions.

This is a great collection of what I consider to be The Avengers in their prime. Highly recommended stuff.

Posted by The Crabby Reviewer at 8:18 PM