The Stern/Milgrom/Sinnott team starts firing on all cylinders, as The Avengers start what may be their greatest era.

Picking up exactly where THE DEFENDERS EPIC COLLECTION, VOLUME SIX: THE SIX-FINGERED HAND left off, THE AVENGERS: ABSOLUTE VISION, BOOK 1 opens with THE AVENGERS ANNUAL #11, which pits The Avengers against The Defenders, with both teams being manipulated by the cosmic threat of Nebulon, and his wife (!) Saturnalia. This issue was written by DEFENDERS scribe J.M. DeMatteis, and reads more like it was intended to be a DEFENDERS annual. It's a middling story that's mostly one big fight, but I've always had a soft spot for this issue, since it was one of my "read-it-a-million-times-as-a-kid" comics.

From there, we move on to a "read-it-probably-ten-times-in-the-past-few-years" comic, THE AMAZING SPIDER-MAN ANNUAL #16, which features the first appearance and origin of the new Captain Marvel. (Seriously, I have read this issue recently in at least five different collections, if not more.) This issue doesn't precisely fit here (It would have been a better fit in THE AVENGERS: THE TRIAL OF YELLOWJACKET, but kudos to Marvel for managing to fit in in somewhere., as it's an absolute must-read in AVENGERS continuity.), but so what? Better late than never, I say. Editor Mark D. Beazley follows this up with a helpful text recap that summarizes the ups and downs of Hank Pym before we get to the meat of this collection starting with THE AVENGERS #231. Yet another reason why Marvel has been killing DC in the collected editions.

The bulk of this book is high-quality AVENGERS storytelling. As a team book filled with A-listers, writer Roger Stern couldn't really do much in the way of character development with the big guns, but he made sure that the team members that didn't have a title of their own were given plenty of sub-plot attention, and they all have a chance to shine, from Hawkeye to She-Hulk to The Wasp and the married members of the team, The Vision and The Scarlet Witch. Stern introduces a new member to the group in this collection, Starfox, brother of the Mad Titan, Thanos, and pits the team against such varied threats as The Plant-Man, The Wizard, Moonstone, Electro, The Rhino, Blackout, The Lava Men, and Morgan Le Fay. The collection also includes a crossover with John Byrne's FANTASTIC FOUR, as well as one with DOCTOR STRANGE (Where the mansion comes under assault by Dracula, of all people...), and a Bill Mantlo penned AVENGERS ANNUAL where the team travels to the moon to meet The Inhumans. The titular Vision story really kicks into high gear in the second volume, but this collection lays the groundwork nicely. This volume even includes the infamous "Assistant Editors Month" issue that finds a group of Avengers reservists appearing as guests on "Late Night with David Letterman". 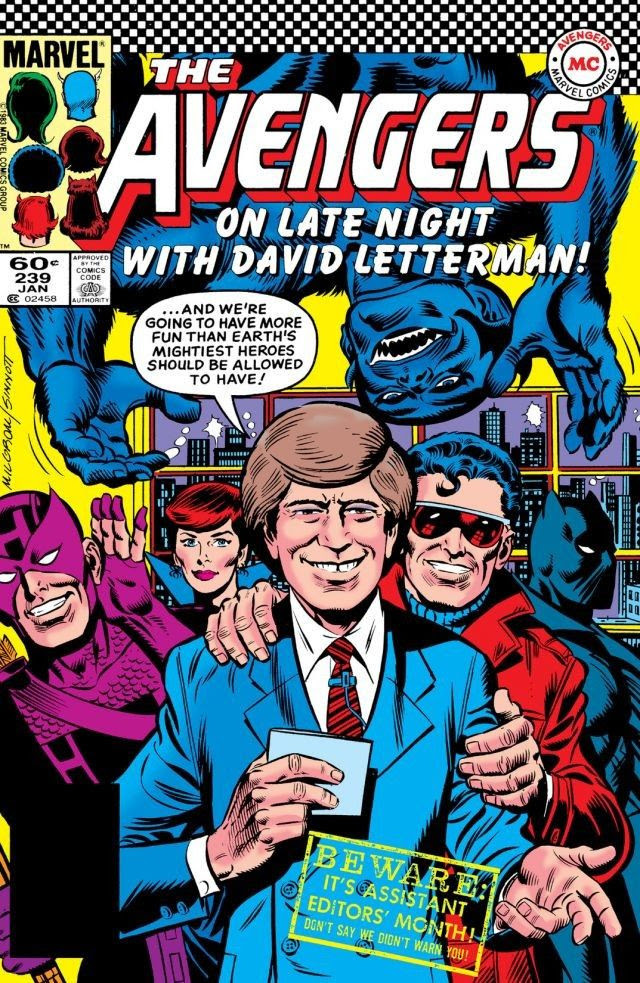 THE AVENGERS: ABSOLUTE VISION, BOOK 1 collects THE AVENGERS ANNUALS #'s 11-12, THE AVENGERS #'s 231-241, FANTASTIC FOUR #256, and DOCTOR STRANGE #60. Writer Roger Stern was really hitting his stride on the book in these issues, and the art team of Al Milgrom and Joe Sinnott brought a clean, uncluttered look to the series that makes them stand out as my all-time favorite AVENGERS art team. Milgrom doesn't get a lot of love from fans, and I agree that his work can be kind of dodgy, depending on who was inking him, but Joe Sinnott could probably make something that I drew look good, and he really brings out the best in Milgrom.

Overall, another rock-solid AVENGERS collection. It only gets better from here....


Posted by The Crabby Reviewer at 2:36 PM