The Last Days of Jack Sparks, by Jason Arnopp 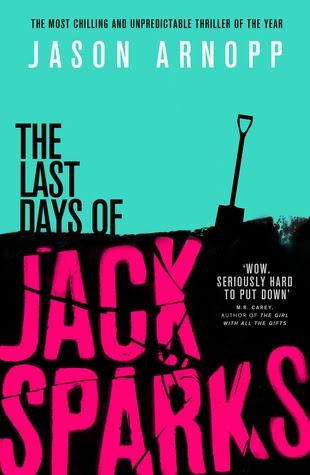 I'm always down for demonic possession in my entertainment, and having thought Grady Hendrix's MY BEST FRIEND'S EXORCISM was one of the best novels of the year, I was very excited to read Jason Arnopp's THE LAST DAYS OF JACK SPARKS. All of the blurbs by well-known authors, and the raves I've heard from people that I know (And whose opinions I trust...) only served to ramp up that excitement.


Now, I'm not an easy person to scare, so your mileage will vary, but I didn't find this book scary in the least. It's well-crafted, and Arnopp does an excellent job of seeding clues along the way, and he gathers all of his loose threads together for a very convincing ending, but the further I got into this book, the harder it became for me to go on.

The main problem with this narrative is that the titular Jack Sparks is such an unlikable character. Sparks is famed for his intensely personal books, such as JACK SPARKS ON DRUGS, which detailed his experiences taking and documenting the effects of various illegal drugs, and ended up making him into an honest-to-goodness junkie. His latest, JACK SPARKS ON THE SUPERNATURAL entails his investigation, and inevitable debunking of, the supernatural. The books opens in Rome, as Jack witnesses an especially harrowing exorcism involving a young girl. Jack, ever the non-believer, chooses the exact wrong moment to laugh at the proceedings, and finds himself subjected to the wrath of the demon.

The remainder of the book follows Jack's descent into demon-haunted madness, and is a textbook example of "The unreliable narrator". Arnopp does a masterful job of creating doubt about the truth in Jack's writing, but Jack is SUCH a loathsome, awful character that it was really hard to muster up the energy to care about what happens to him. And considering that this book is the literary equivalent of a found-footage movie, the end is never really in doubt.

I thought this was a well-done book, and I'll be keeping an eye on Mr. Arnopp in the future, but I really can't recommend this book to anyone looking for scares.

Posted by The Crabby Reviewer at 10:01 AM