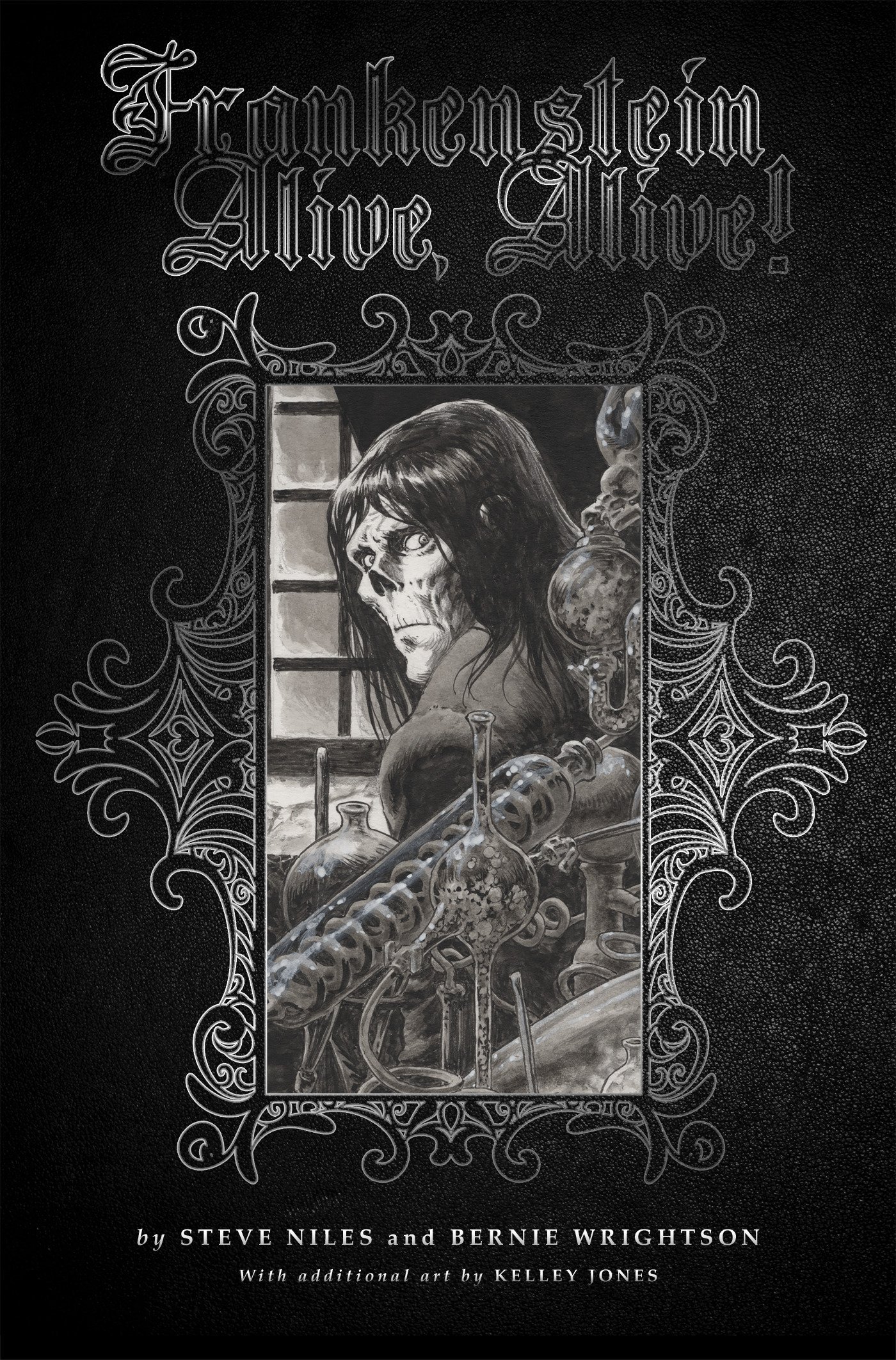 The swan song of a Horror legend.

I grew up with Bernie Wrightson. His art filled my childhood. From his staggering work on Stephen King projects, such as THE STAND, CYCLE OF THE WEREWOLF, CREEPSHOW, and their pages in X-MEN: HEROES FOR HOPE to beautiful deluxe format reprints of his classic SWAMP THING stories and his collaborations with Bruce Jones, Wrightson's art was something to be treasured. I returned to his comics and books over and over again, drinking in all of his detailed work, and wishing, in vain, that I could someday be so talented.

Bernie Wrightson passed away in 2017, and FRANKENSTEIN ALIVE, ALIVE! THE COMPLETE COLLECTION is his last professional work.Unfortunately, he was unable to complete the final issue of the four-issue limited series, but he hand-picked his successor, Kelley Jones, and the completed work stands as some of Wrightson's best ever. One double-page spread, seen below, held my complete attention for at least 5 minutes. The crocodile is staggering. (Also below, the preliminary pencil art, which I stared at even harder, since the crocodile was originally a shark....) 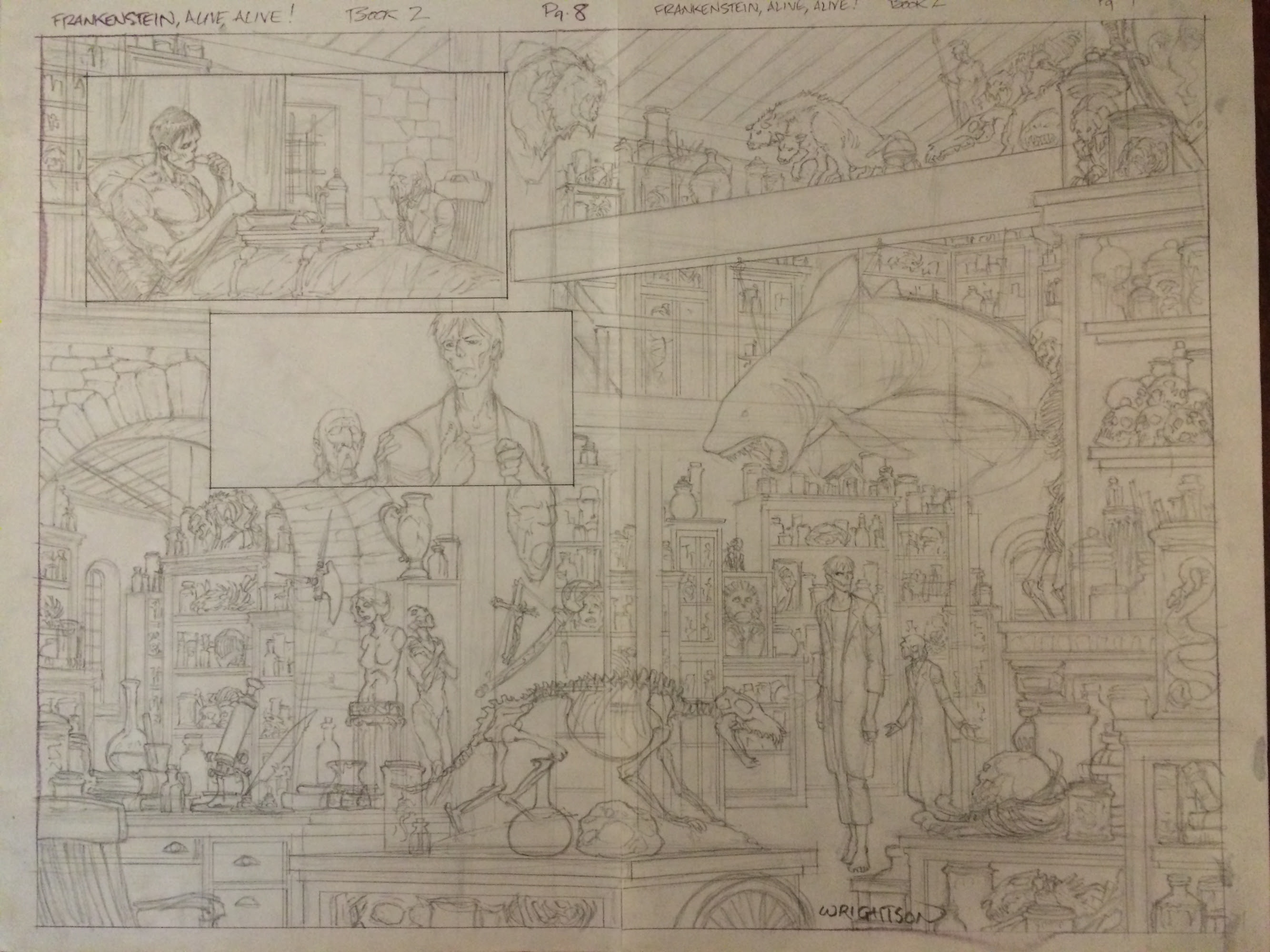 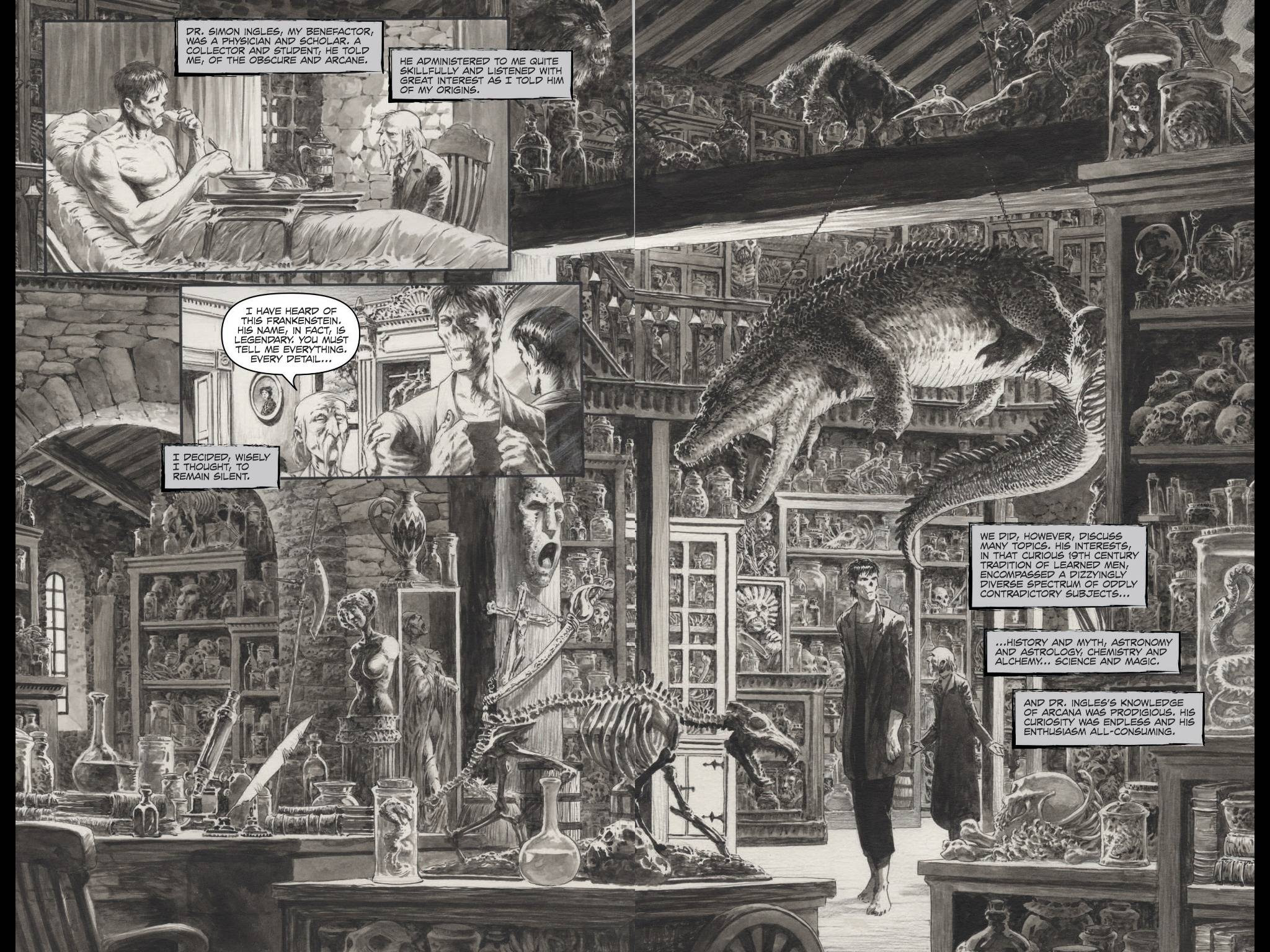 I have made no secret of my distaste for the work of author Steve Niles, who I feel is an overrated, talentless hack. Unfortunately, I have had to suffer through a lot of terrible Steve Niles stories to enjoy the Bernie Wrightson art that accompanied them. The good news here is that Niles and Wrightson have crafted a touching, macabre story, and Niles doesn't muck it up with awful prose. His captions and dialogue are unobtrusive, and he wisely lets Wrightson do all of the heavy lifting.

Wrightson completed the first three issues, and did a good portion of the fourth, with Kelly Jones completing the remainder. I wish I could say that it was a seamless transition, but Jones, while staying faithful to the underlying vibe of the story, is unable to reconcile his minimalist style with Wrightson's hyper-detailed one. The Jones pages have an almost purple cast to them, which clashes with the muted brown patina of the Wrightson pages. I've been a fan of Kelley Jones since he first started out, and his work here is excellent, but it would have been amazing to be able to have the whole story illustrated by Wrightson. Which...we kind of do.

The back of this book has reproductions of Wrightson's thumbnails, layouts, and pencils for almost all of book four, minus the last three pages, so I'm not sure why IDW and Steve Niles didn't just go with Wrightson's rough art, and have it tightened up by a compatible inker? (I think Art Adams would have killed it, personally.)

The book is not perfect. The story is very small, mainly centering on the years that The Creature spends in the company of a Doctor who is not quite what he seems. Those expecting Horror writ large are in for a disappointment, as this book is basically a small slice-of-life story from the years after Mary Shelley's novel ends. The end comes very abruptly, almost as if Niles just stopped writing when Wrightson died.. The book opens with a framing device that is never returned to in the end, which just seemed....off. I get the definite impression that there was more originally intended.

IDW has published this story in a large hardcover format, which suits Wrightson's hyper-detailed art perfectly. As swan songs go, this is not a bad one. Rest in peace, Mr. Wrightson, and thanks for all of the horrors.

Posted by The Crabby Reviewer at 4:56 PM