The Graveyard Book, by Neil Gaiman, with illustrations by Dave McKean 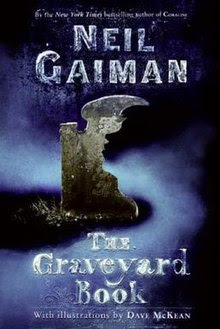 If there's an Author that delivers more satisfying stories than Neil Gaiman, somebody give me their name, because I must really be missing out on some good stuff. Having already delivered what I consider to be a Master Class in long-form storytelling with DC/Vertigo's THE SANDMAN, Gaiman has gone on to pen various children's books (THE WOLVES IN THE WALLS, THE DAY I SWAPPED MY DAD FOR TWO GOLDFISH), young adult books (CORALINE, ODD AND THE FROST GIANTS, STARDUST), and a few staggeringly good adult novels (NEVERWHERE, AMERICAN GODS, and ANANSI BOYS). Gaiman excels at telling large stories, with seemingly unrelated characters and events seamlessly dovetailing to form perfect, flawless endings. His record remains intact with THE GRAVEYARD BOOK, a macabre spin on Rudyard Kipling's THE JUNGLE BOOK.

The story starts off in a way most children's books would frown upon: A family is murdered in their sleep by a man named Jack. Their infant Son escapes his crib and crawls out the front door, toddling his way to the town's Graveyard, with the murderous Jack in pursuit. The deceased residents of the Graveyard band together to chase Jack away, and take in the baby, whom they name Nobody Owens, or Bod for short, to raise him as one of their own. Bod is given "The Freedom of The Graveyard", which enables to to see in the dark, pass through walls, etc., effectively making him a living Ghost. The story unfolds over nine chapters, each of which reads as a standalone short story, where Gaiman relates the significant events that shape Bod's life as he grows to young adulthood with his strange, loving extended family.

As with CORALINE, Gaiman crosses several lines that are sure to freak out more sensitive Parents. To be sure, THE GRAVEYARD BOOK is a macabre story, but therein lies Gaiman's brilliance. He remembers something most adults have long since forgotten: Children like to be scared. What kid doesn't like to pretend their Dad is a Monster, and have him chase them around the house, or watch monster movies, or read about Dinosaurs? Children love the feeling of being scared, as long as they know that they're not in any real danger, and that things will turn out alright. Children's entertainment these days is too sanitized and white-bread. Gaiman delivers a spooky, dark tale, but it's one that I would have no problem giving to my ten-year-old Daughter to read.

The book features illustrations by Dave McKean, Gaiman's SANDMAN collaborator. I've never been much of a McKean fan, and his work here didn't do much to change that.

Highly recommended, for both adults and children.

Posted by The Crabby Reviewer at 9:49 AM