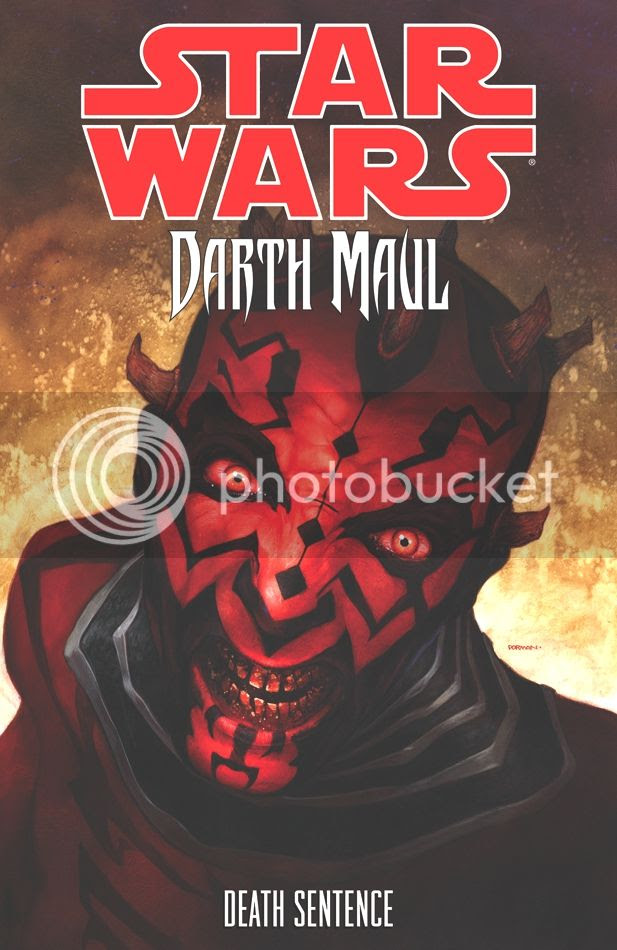 Obviously I am not alone in thinking that Darth Maul, the crimson-skinned Sith Lord, was the only good thing about STAR WARS: EPISODE 1- THE PHANTOM MENACE. Despite being gruesomely dispatched by Obi-Wan Kenobi (Sliced in half and hurled into a seemingly bottomless pit...), Maul has returned for expanded universe adventures, both on television and in print.

STAR WARS: DARTH MAUL- DEATH SENTENCE follows the now half-cybernetic Maul and his equally cheerful Brother, the quaintly named Savage Opress, as they attempt to get some payback on the man (Creature?) that put a price on their heads. The trail leads the Brothers into conflict with The Jedi, of course, and much Lightsaber use ensues.

This is actually all much better than I'm making it sound. Writer Tom Taylor does a good job with his two enormously hiss-worthy lead characters, and keeps the plot and action flowing along smoothly. Artist Bruno Redondo also deserves kudos, and Dark Horse finally manages to present all of the covers to the original four issues of DEATH SENTENCE in the paperback, hopefully overcoming their terrible cover prejudice once and for all. (The fact that those covers were done by the legendary Dave Dorman may have something to do with their desire to show them off.) Sith fans will eat this up. Recommended.