The Strain, Volume 2 by David Lapham and Mike Huddleston, based on the novel by Guillermo Del Toro and Chuck Hogan 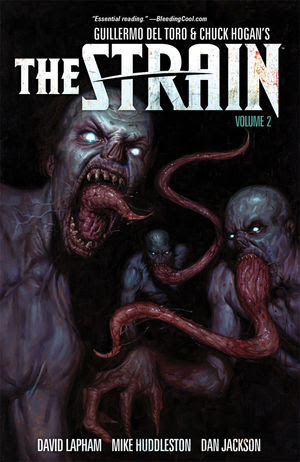 The book starts off on a high note, as we are immediately introduced to one of the most bad-ass characters in recent memory:  Vasily Fet, a hulking Exterminator who is, clearly, the toughest Fet we've encountered yet, making Jango and Boba look downright anemic in comparison. (Don't start telling me that Jango and Boba have two "T's" in Fett...I know. Just roll with it.) As New York City is slowly and insidiously being overrun by Vampires, Vasily Fet stumbles on the center of the outbreak, at "The Bathtub", the construction site at Ground Zero for the September 11th attack. (As construction winds down on the nearly-complete Freedom Tower, I was struck by how Del Toro and Hogan had managed to totally date the story by choosing the Ground Zero construction site as the "Haunted House" of their tale....It seemed very cool, when the novel was first released, but now it really dates the story and pulls the reader out of the sense of "This is happening NOW!" that a story like this really needs.) Fet soon hooks up with Eph and Setrakian and Nora, completing our story's roster of "Fearless Vampire killers", and they set out to track down and destroy "The Master", the renegade Vampire Elder who is trying to take over the world.

I had mixed feelings about THE STRAIN when I first read the novel...I thought the J.F.K. sequence was waaaaay too long, but the rest of the book more than made up for it. Dark Horse mercifully shortened that sequence in THE STRAIN, VOLUME 1, so this adaptation has been all meat, no filler. Writer David Lapham (Of STRAY BULLETS fame) keeps the story moving along at a brisk pace, and Artist Mike Huddleston does a good job with the artwork, although it is often too muddled-looking for my tastes. (His sketchbook section at the back is a knockout, so maybe my quibbles with the art are due to Dan Jackson's colors....?) The original covers, by E.M. Gist, are reprinted in the book, and they are amazing.

The Master, Eph, and Setrakian, by E.M. Gist.

Dark Horse has been knocking it out of the park with their adaptation of THE STRAIN. I hope they can keep the team together through all three novels.

Posted by The Crabby Reviewer at 10:31 AM