Bluffton: My Summers With Buster 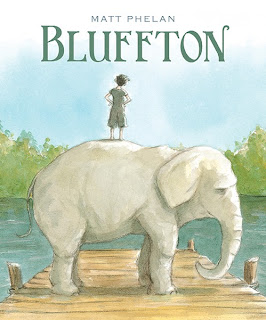 Matt Phelan's wonderful graphic novel BLUFFTON: MY SUMMERS WITH BUSTER is a beautiful, nostalgic coming of age story that manages to avoid any and all traces of sappiness, schmaltz, and/or sickening sweetness.

Clocking in at a massive 240 pages, Phelan gives himself plenty of room to convey the lazy summers that the young Buster Keaton spent in Bluffton, Michigan, a small town that became a summertime retreat for vaudevillians in the early part of the twentieth century. Young Buster is the selling point of the book, and the glimpses into his childhood are alternately fascinating, hilarious, and sad, but the real star of the book is Henry, a local boy who befriends the out-of-towners, and becomes a part of their extended family. This is a phenomenal book, and Phelan is a wonderful storyteller. My only complaint is that his faces all tend to look alike, and it was sometimes difficult to pick out who was who when there were a lot of children in the same panel. The review copy that Candlewick provided was in black-and-white, but the final version is in color. I've seen the color version, and I much prefer the black-and-white line art. The colors in the printed book are all oddly pastel, and look very out of place.

BLUFFTON: MY SUMMERS WITH BUSTER is suitable for all ages, and highly recommended.

Posted by The Crabby Reviewer at 5:49 PM