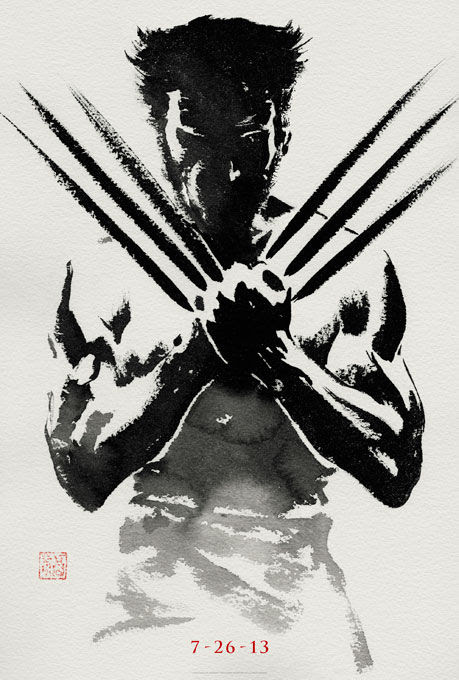 The X-MEN movies have been a mixed bag for me: Aside from Hugh Jackman and Sir Ian McKellen, I really, REALLY disliked Bryan Singer's first film. I thought the second one was great, and I seem to be the only person alive that didn't hate the third film. X-MEN ORIGINS: WOLVERINE was hideously bad, like SYFY Channel bad. I really liked X-MEN: FIRST CLASS, despite the fact that it didn't jibe with the timelines of any of the other films. I was really looking forward to seeing THE WOLVERINE, but I was kind of put off by the bad reviews and underwhelming box-office. I was resigned to seeing that Oprah movie this weekend with my Wife, when fate intervened: I got some scary news about my health, and my Wife, bless her, decided that we needed to see a "Daddy movie". God works in mysterious ways......

THE WOLVERINE follows the basic structure of the classic Claremont/Miller mini-series that finds Logan in Japan, where he meets his true love, Mariko, and becomes embroiled in her family's dirty business dealings. It's not a beat-for-beat adaptation, but it captures the soul of the story, and does so very well.

Honestly, I was surprised how much I enjoyed the film. Jackman is, as usual, awesome. I've always enjoyed his Wolverine portrayal, but lately I've been finding that he's really good in damned near everything he does. And the guy must bust his ass to get the physique needed to play Logan. I think the Director, James Mangold, is a capable filmmaker, and I've enjoyed the films of his that I've seen (COP LAND, WALK THE LINE, HEAVY, and IDENTITY), but I've never been blown away by any of them. THE WOLVERINE didn't exactly blow me away, but I thought it was a damned solid film, and I would love to see Jackman and Mangold reunite for a follow-up, once Bryan Singer is done destroying the X-MEN franchise next year with his DAYS OF FUTURE PAST film. (Sorry, I'd love for it to be great, but Singer hasn't made a decent film in years, the movie looks like it has waaaaay too many characters in it to be coherent, and it's maybe one film too soon to take the spotlight away from the FIRST CLASS characters. Prove me wrong, Singer!!!!)

I was also pleased to see that the film has a really big development for Wolverine that hasn't been spoiled online. For the first time in a long time, I was taken by surprise at the movies. There's a fairly CGI heavy battle at the end, and I had heard poisonous word-of-mouth about the effects, but I thought they were seamless, and I'm usually very picky about my CGI. The score, by Marco Baltrami, was awesome enough to make me go right out to buy a copy. Make sure you stick around through the credits, as there's a fairly long scene that you'll want to see. And did anyone catch a Stan Lee cameo? If there was one, I missed it, which would make this the first Marvel film that I can remember without one......


Posted by The Crabby Reviewer at 6:34 PM