Noir: A Collection of Crime Comics 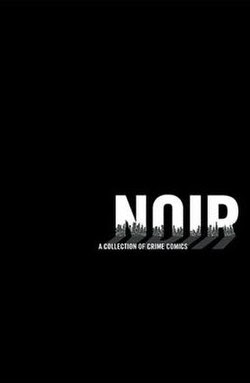 Dark Horse Comics delivers 120 pages of pitch-black crime (With a dash of Sci-Fi thrown in via Dean Motter's MISTER X story...) with their delightfully bleak graphic novel NOIR: A COLLECTION OF CRIME COMICS. The book features a stellar lineup of talent, including Eduardo Barreto, Ed Brubaker & Sean Phillips (Who contribute a staggeringly good CRIMINAL story), Alex De Campi & Hugo Petrus (The one dud in the entire thirteen story book- I just didn't get it. The art was nice, though.), The Fillbach Brothers, Stefano Gaudiano, Rick Geary, Paul Grist, Ken Lizzi & Joelle Jones (An illustrated prose piece, which I usually detest in a comic, but this one worked well, at least until the "Too Sci-Fi for me to swallow" ending.), Kano, David Lapham (Who contributes a nasty Virginia Applejack/Amy Racecar STRAY BULLETS tale), Jeff Lemire, Dean Motter, Chris Offutt, M.K. Perker, and Gary Phillips.

All of the above, aside from Alex De Campi's story, range from "Really damned good" to "Excellent", but the reason I'm posting this rave review is because of the final story, Written by Brian Azzarello, and Illustrated by Fabio Moon & Gabriel Ba. "The Bad Night" is.....ummm....well, there's no way to talk about it without getting into a spoiler that would ruin the whole point of the story. But it's a phenomenal read, and the ending made my jaw drop. I'll say this, which is probably too much already: Most people who have been reading comics for a long time will be glad they picked up this book. Azzarello's story puts an entirely new spin on a tale that's engrained into every longtime fan's subconscious.

NOIR: A COLLECTION OF CRIME COMICS was published by Dark Horse Comics in late 2009, but it's well worth seeking out. Highly recommended.