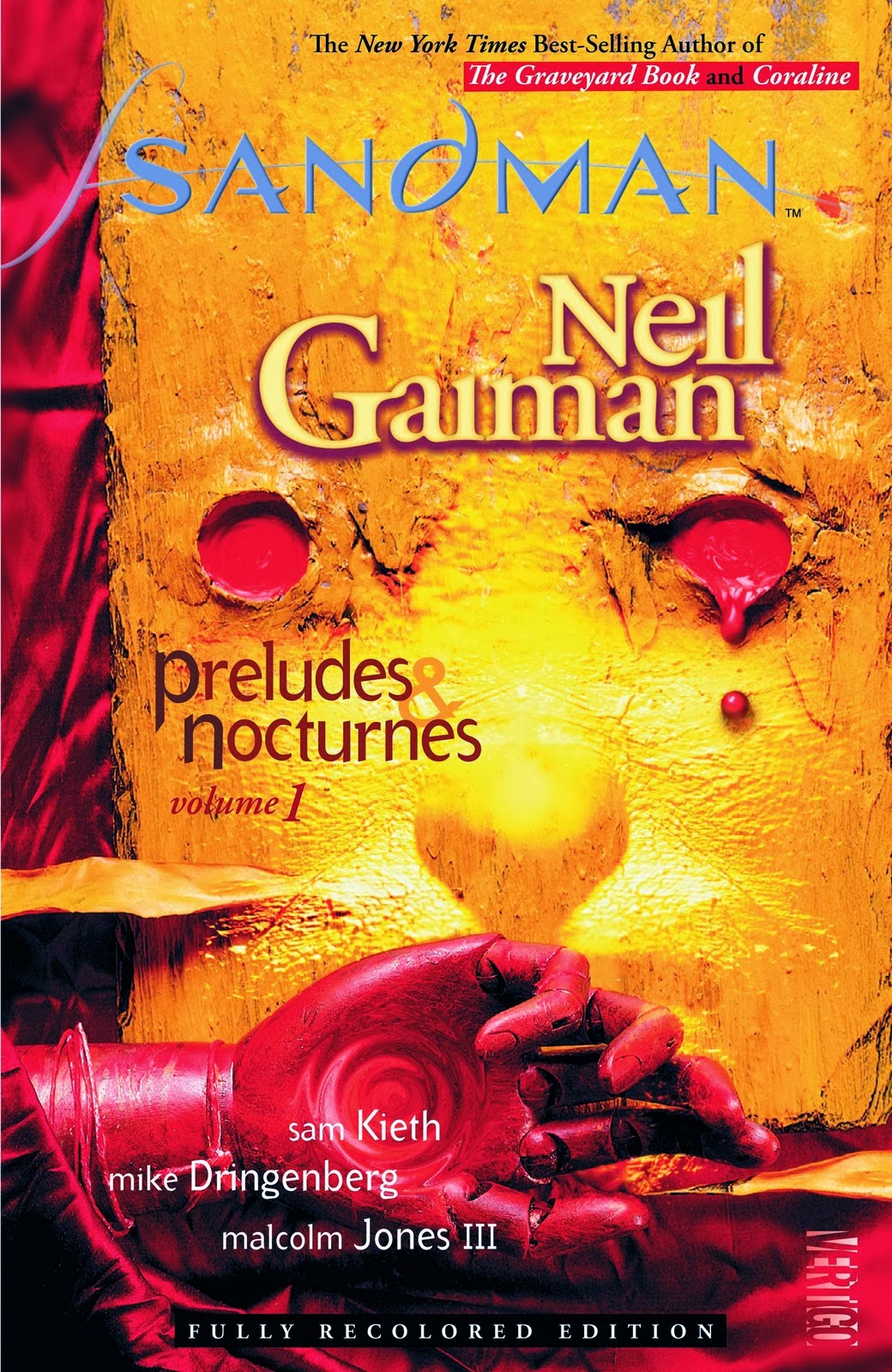 I doubt that anyone reading this blog has not already read Neil Gaiman's staggeringly good run on THE SANDMAN, so this won't be as in-depth a review as usual.

THE SANDMAN was, years ago, one of my "Hot commodity" comics that I set aside and refused to sell, no matter how much I needed the money. (Believe it or not, I was offered over $600.00 for the complete run when the series first wrapped up. I have no idea what the collection is worth now, but I would assume that digital, and the proliferation of trade paperback collections, which were not as easily available back then, would have killed the value of the original floppies.) I have reread those floppies countless times, and the trades numerous times, as well, but DC/Vertigo sucked me in for the triple-dip when they reissued the complete set of trades, with remastered color, in a snazzy slipcase.

This first volume, THE SANDMAN, VOLUME 1: PRELUDES & NOCTURNES, has never looked better. The coloring, which I remember as being extremely muddy, which was the "Mature DC" (Not-yet-Vertigo) fashion of the time, is a revelation. The new coloring really makes the artwork pop, and give a whole new life to the stories.

The story, for the uninitiated, is an epic tale of Fantasy that has some heavy Horror leanings. In the early 1900's, an occultist decides to perform a rite that will capture the embodiment of death. The ritual fails, instead resulting in the capture and imprisonment of Dream, Death's younger brother, one of the seven "Endless". Dream is held captive, powerless, for decades. He eventually frees himself, and sets off on a quest to regain his stolen articles of power, and rebuild his kingdom.

This first volume ties in heavily with the rest of the mainstream (Superhero) DC Universe of the time (The late 1980's), something that the rest of the series doesn't do, but Gaiman handles the cross-pollination wonderfully. There are appearances by John J'onzz, Mister Miracle, Batman, Green Lantern, John Constantine, and Justice League villain Doctor Destiny, reworked by Gaiman into a truly demented adversary for Morpheus.

Looking at this first volume, I was struck by how much I enjoyed the art in the first few issues, which was provided by Sam Kieth. His work is like none other, and seeing it recolored and gussied up really hammered home what a great, great job he did on those early issues. I missed him when he was gone. Not that Mike Dringenberg didn't do good work, but his art always seemed a little too bland for my tastes.

I'm reading these newly remastered volumes alongside THE ANNOTATED SANDMAN, VOLUME 1 (Review to come some day...), and there's a lot of talk there about pages in this volume being redrawn for the first collected edition, and panels being rearranged, pages being cobbled together to make the book read smoother.....I would have loved to see DC/Vertigo include some of these as back-matter in this book. There's a real lack of extras, which is especially glaring in a book as seminal as THE SANDMAN.

This is great stuff, either way, and it only gets better from here. If you've never read THE SANDMAN, you owe it to yourself to give it a try.

Posted by The Crabby Reviewer at 10:02 AM