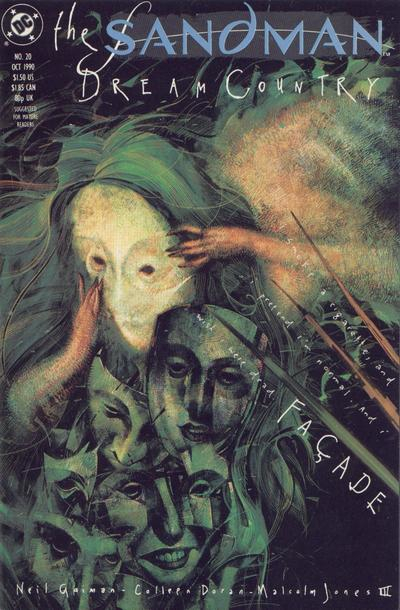 With special guest, The Sandman!

Morpheus takes a back seat in THE SANDMAN, VOLUME 3: DREAM COUNTRY, as Neil Gaiman tells four one-off stories that find The Sandman in a peripheral role, or, in the case of the final story, not featured at all.

Volume 3 is the slimmest of the volumes thus far, collecting THE SANDMAN #'s 17-20, but the collection is rounded out by a presentation of Gaiman's script for issue #17, "Calliope", a disturbing work about a blocked writer that holds a Muse captive to further his career. I often see THE SANDMAN described as "Fantasy", or "Dark Fantasy", but I've always categorized it as Horror. Even when Gaiman is playing in other genres, the horror is always there, just below the surface, waiting to be revealed.

Rereading this series years later, I was struck by the large role that The Furies play in it, presaging their ultimate role at the end of the series. This is truly a series that demands to be read again and again, appreciating the forethought and precision with which Gaiman set all of his pieces in place. moving his protagonist towards his inevitable conclusion in future volumes.

In addition to the sad tale of Calliope (Which opens the door to the larger mystery of Orpheus, which will be explored in a future volume..), Gaiman also tells the tale of a cat that may have the secret to feline world domination, the first performance of William Shakespeare's "A Midsummer Night's Dream", and the sad end of forgotten DC character Element Girl.

The art is handled by Kelley Jones (On "Calliope" and "The Dream of a Thousand Cats"), Colleen Doran ("Facade"), and Charles Vess ("A Midsummer Night's Dream"). Gaiman's longer arcs get all of the attention, but, in my book, THE SANDMAN was never better than when he presented a one-shot story. These are four of his very best. Highly recommended.

Posted by The Crabby Reviewer at 6:31 PM