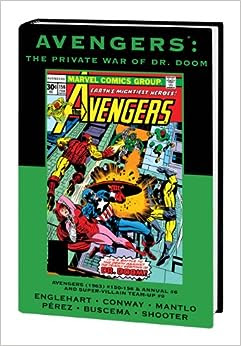 While I still mourn the passing of the glorious MARVEL PREMIERE CLASSIC line, life must go on! Hence, my review of MARVEL PREMIERE CLASSIC, VOL. 89: AVENGERS: THE PRIVATE WAR OF DR. DOOM! Onward, True Believers!!!! Past the break!!!!
This is kind of a scattershot volume, in terms of story content. Collecting THE AVENGERS #'s 150-156, AVENGERS ANNUAL #6, and SUPER-VILLAIN TEAM-UP #9, this is an entertaing, all-over-the-place book. It starts off with a classic "The old order changeth!" Avengers-pick-a-new-roster story that stretches out for two whole issues, one of which, THE AVENGERS #150, is mostly a reprint of THE AVENGERS #16, the original "Old order changeth!" issue. After a tumultuous meeting that finds old members leaving and new members inducted, a giant package is delivered to the doorstep of Avengers Mansion that contains the re-animated corpse of Simon Williams, A.K.A. Wonder Man. (You can't help but love an evil mastermind who takes the time to pack up a reanimated corpse in a giant crate, mail it across the country, and wait patiently for it to arrive on their doorstep. That takes balls.) The Avengers then jet off to Louisiana, to confront The Black Talon, a Voodoo master who dresses like a giant chicken. There's a lot of hooey about "Zuvembies", a word Marvel invented to get around the restriction on Zombies in Comics Code-approved books. Can you imagine what a toothless organization that must have been?

Anyway, The Avengers return home and are accosted by The Whizzer (Huh huh...they said "Whizzer".), who is looking for help finding his giant, retarded, radioactive son, Nuklo. Who is being held captive by The Living Laser. Who has just retrieved The Serpent Crown. Which The Avengers LEFT LYING AROUND IN THE RUBBLE OF A BUILDING THAT WAS WRECKED WHEN THEY LAST FOUGHT A GUY WEARING THE SERPENT CROWN!!! (!!!!) Really, they couldn't stop for a minute and pick that thing up? It's kinda dangerous, guys. Then they are immediately attacked by Attuma (IT'S NOT A TUMAH!!!"), who wants to enslave The Avengers and make them fight The Sub-Mariner, which leads everybody into conflict with Dr. Doom. There's a lot of fighting, a lot of inter-team angst as we see the beginning of the classic, creepy Wonder Man/Scarlet Witch/Vision love triangle, and tons and tons of that classic 1970's Marvel exposition that takes up huge portions of every page.


This isn't an earth-shatteringly important book, but it is a fun one. The writing is serviceable, there's some gorgeous art by George Perez, John Buscema, Sal Buscema, Jack Kirby (Who contributes most of the covers, which are stunning.), and even Jim Shooter. The collection includes all covers, and a letters page from THE AVENGERS #151, which explains why #150 was mostly reprint. That open, honest rapport between Marvel and the fans was what made me a lifelong Marvelite way back when I was a kid.

Posted by The Crabby Reviewer at 9:46 AM