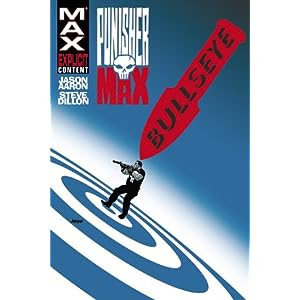 Fans who are missing their dose of Garth Ennis-style violence/comedy/insanity will be delighted with this batshit-crazy series.
PUNISHER MAX continues in the same alternate-reality that Garth Ennis wrote about in his PUNISHER series. (I'm years and years behind on that series, so I don't know how it ends yet, but, Frank is alive when this series starts, so SPOILERS!!!)

Jason Aaron and Steve Dillon built a brand-new Kingpin in the first volume of PUNISHER MAX, and gave him a spectacularly bloody throwdown with Frank Castle, A.K.A. The Punisher....Now Bullseye gets the same treatment in PUNISHER MAX: BULLSEYE, which collects PUNISHER MAX #'s 6-11, along with all six covers (By Dave Johnson) and an eensy-weensy little selection of Steve Dillon's penciled pages.

There's not a whole lot to actually review here....The six-issue arc is basically a protracted cat-and-mouse game between Frank and Bullseye, who is crazy, violent, and smart-as-hell. Writer Jason Aaron gets into the muck and grime in both Frank and Bullseye's heads, and ends the book with a revelation that, literally, had me reaching for a magnifying glass. (It's printed in type so small that I thought I was going to have an aneurysm squinting at it, even WITH the magnifying glass. OLD PEOPLE READ THIS STUFF, MARVEL!!!!) I was shocked by the reveal, and I'm eagerly awaiting the next volume to see where Aaron and Dillon take this. (FYI, I'm years behind in my comic reading....the next volume is not only out already, but the whole series has been concluded and collected in an omnibus, which you would undoubtedly be better off reading than the assorted trades and/or hardcovers.)

Posted by The Crabby Reviewer at 12:22 PM