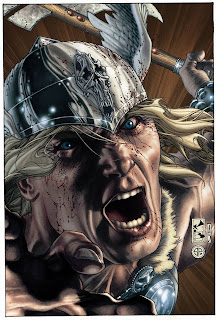 THOR: FOR ASGARD gets the first "Crabby Reviewer Half-A-Story Alert" award. Congratulations, Robert Rodi and Simone Bianchi!!
I enjoyed Robert Rodi's previous THOR tales (THOR & LOKI: BLOOD BROTHERS and THE ASTONISHING THOR), so this seemed like a no-brainer. The story takes place at an undetermined point in the future. Asgard is being assailed by a seemingly endless, brutal winter ("Fimbul Winter"...gotta love that Asgarian-speak!), Balder is dead, Loki is missing, and Thor is ruling in Odin's stead while Odin is on a quest to find a way to undo Asgard's troubles. Asgard's grip on the nine realms is slipping under Thor's reign, and the denizens of the other realms are revolting, leaving Asgard besieged on all sides. To make matters worse, the Golden Apples that the Asgardians eat to maintain their immortality are no longer growing, thanks to the frigid cold. Bad times all around.

This particular Thor adventure is steeped in Asgardian lore, and, as such, has a lot of stuff that just seems, in the light of day, ridiculous. To his credit, Rodi's story beats do have the feel of something that would have been handed down in an old myth, but as a 2014 reader, the way that Thor escapes Niffelheim was just plain funny.The art, by Simone Bianchi, is beautiful, but his storytelling ability leaves a lot to be desired. Also, I'm about to turn 44, and I have a prescription for bifocals that I can't afford to have filled, so I know my eyes are not so hot, but holy jeez, the squiggly font that all of the Asgardians speak in was murder on my eyes! Also, the book ends with almost nothing resolved, and a big reveal that meant nothing whatsoever to me. No follow-up or sequel has been announced, and considering that this book came out over three years ago, I wouldn't hold my breath for one. So know going in: There's no ending to this story.

Posted by The Crabby Reviewer at 1:21 PM