Avengers: The Bride of Ultron 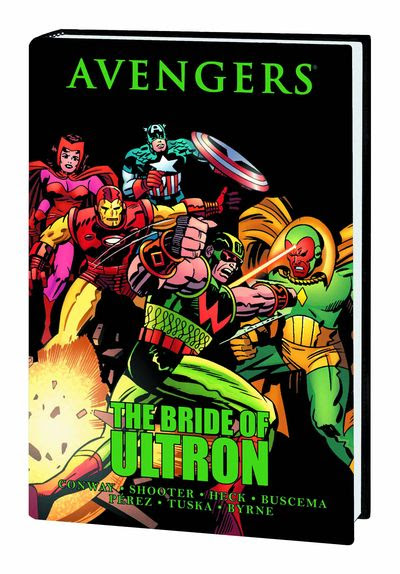 This is where I became a Marvel fanboy for life.
As a kid back in The Bronx in the mid-to-late 1970's, it wasn't easy to be a budding comic-book collector. This was pre-Direct Market, pre-comic shops (At least in The Bronx...There were a few in Manhattan, but I went to Manhattan once or twice during the first 12 years of my life, so they may as well have been on the moon.), and pre-internet. Distribution was scattershot, and comic-hungry kids like myself had to check each "Candy Store" (A.K.A. newsstand) that we were anywhere near to see what comics they had. Luckily, I had a very indulgent mother, who never balked at buying me reading material, and always had 30 cents handy for a comic book emergency. Some of my earliest Marvel Comics memories are reprinted in AVENGERS: THE BRIDE OF ULTRON, which collects THE AVENGERS # 157-166.

Just to give you an idea of how hard it was to follow a book every month, here's what issues I had back then, and how I acquired them:
THE AVENGERS #159- Bought by my mother at some obscure newsstand while we were visiting a relative in The Bronx.
THE AVENGERS #160: Bought years after the fact at Sheila's, a strange little Candy Store/Jewish restaurant hybrid that seemed to have no end of comics that were years old. I believe I purchased this issue around the time THE AVENGERS #200 was released.
THE AVENGERS #162: Another one bought at Sheila's years later, and she gave me a discount off of the 30 cent cover price because the cover was tattered.
THE AVENGERS #163: Bought as part of a boxed-set of random issues at Korvettes's in Westchester a few years after it was initially released. Man, I loved those strange blind-buy boxes...they were always filled with Marvel goodness. It was like winning the lottery every time Mom bought me one.

You were lucky to string together a few consecutive issues back then....forget about amassing a complete run of anything We had a whole underground network of kids that lived all over The Bronx that would buy issues other kids were looking for, and either sell them outright, or trade for issues they needed. It was an exciting, nerve-wracking time to be a fan. Kids today have no idea how good they have it. (Like kids read comics nowadays....)

Anyway, enough of my senile old ramblings! How is this book, you ask? Great!

The bulk of it is written by Jim Shooter, who is reviled by people that worked under him while he was Marvel's Editor-In-Chief, but the guy could sure produce and write great comics. (He ever COLORED one of the issues collected here! A true renaissance man!)

There's so much mansion invading and destruction in this book...there must have been a TON of off-screen rebuilding going on. Tony Stark must have been PISSED.

Anyhow, the stories in this book read as smooth as butter. The art is mostly provided by George Perez and John Byrne, both inked by Pablo Marcos, who makes their already great work look even better somehow. He is one of the unsung great inkers of all-time. Jack Kirby contributes two stellar covers, Don Heck and George Tuska each contribute an issue, there's a beautiful Gil Kane cover, a couple of issues drawn by the mighty Sal Buscema.....this is just a phenomenal book. I can't recommend it highly enough.

Posted by The Crabby Reviewer at 10:07 AM