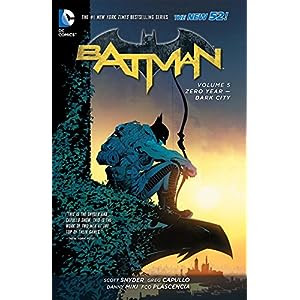 I'm of two minds about this latest volume of Scott Snyder's epic "New 52" BATMAN reboot. Before getting into specifics, I guess that the truest thing that I can say is that BATMAN, VOLUME 5: ZERO YEAR- DARK CITY is like that summer blockbuster film that you really enjoy, despite it's many, many flaws.
Writer Scott Snyder and artist Greg Capullo bring their epic tale of Batman's first big adventure to a close in this massive volume, which collects BATMAN #25-27 and 29-33. Gotham has been well and truly laid low by The Riddler, of all people, who has seized control of all of the city's technology, blown the retaining wall that kept out the river, caused a massive storm, and used Pamela Isley's plant experiments to reduce Gotham to a flooded-out wreck of darkness, destroyed property, and massive jungle-like plant growth. (He basically did this because he felt that no one appreciated how smart he was. If you know anyone who is capable of doing something like this, PLEASE...compliment them once in a while, OK?)

There are a lot of great story beats here, and I have to come clean and admit that, one a scale of 1-10, I gave this collection a solid 9- I really enjoyed much of it, but there was enough side-tracking, meandering, and plain-old "I just can't believe that happened" moments to make me say that I liked this book, BUT.....I have a hard time recommending it wholeheartedly.

I always felt that The Riddler was a terribly underserved villain, because, much like Sherlock Holmes, most people aren't smart enough to write such a smart character. Snyder succeeds in making The Riddler act smart, but he's not very well-developed, at least not here. That might come later in Snyder's run, but here he's just a smart nerd who dresses in a loud suit and has a question-mark fetish.

Snyder's characterization of Bruce Wayne disturbs me a little, because he's such a damaged character...A lot of what Snyder shows us about Bruce's past takes him out of the "Obsessed vigilante" category, where I've always placed Batman, and puts him into the "This guy in fucking nuts" category. I have no problem with how Batman acts in Snyder's books, but his Bruce Wayne is someone I'd stay far away from. There's some weird stuff revealed about Bruce's past in this collection, and it's stuff that I could have lived without knowing. I'll also spare you one of my endless "New 52" rants...I'll just say that I've read a LOT of "New 52" books, and none of them feel "Real" to me....They all read like some huge, extended "Elseworlds" book that has no end. This isn't the DC Universe that I grew up reading, and it never will be again, I suppose, so...While there are certainly some good stories being told, none of it is really registering as canon to me. Too many things contradicting and bumping against the things I grew up knowing to be true.

Another complaint that I had was the huge sidetrack this overly-long ZERO YEAR story takes when it veers from The Riddler to Dr. Death for a few issues. Yeah, the stories are connected and it all flows organically, but it took an already long storyline and made it much, much longer.

Greg Capullo's art is still leaving me a bit cold...a lot of his faces look the same, and there were, again, a few instances where I had no idea what the hell he was trying to show. (At one point, it looked like Jim Gordon jumped off of a 200-story building and landed in the equivalent of a children's wading pool filled with water.) Good artist, but sometimes a poor storyteller.

The end of this book was a rocket ride to a thrilling finale, but it was way too reminiscent of THE DARK KNIGHT RISES, with Gotham isolated and held hostage by a madman, Batman, Gordon, and Fox running around trying to locate the mastermind's lair, the military about to spring into potentially disastrous action at any moment.....Exciting stuff, but I just saw it on the big-screen a few years ago.

Anyway, this is a good read, but, old coot that I am, I'm still not digging "The New 52", and I'm eager to get Batman back into the present day....I still haven't seen how he deals with Damian's death, and it's been almost a year since I read that story. He'll be alive again before I see how Bruce manages without him.

Posted by The Crabby Reviewer at 10:46 PM