The Avengers Versus Thanos 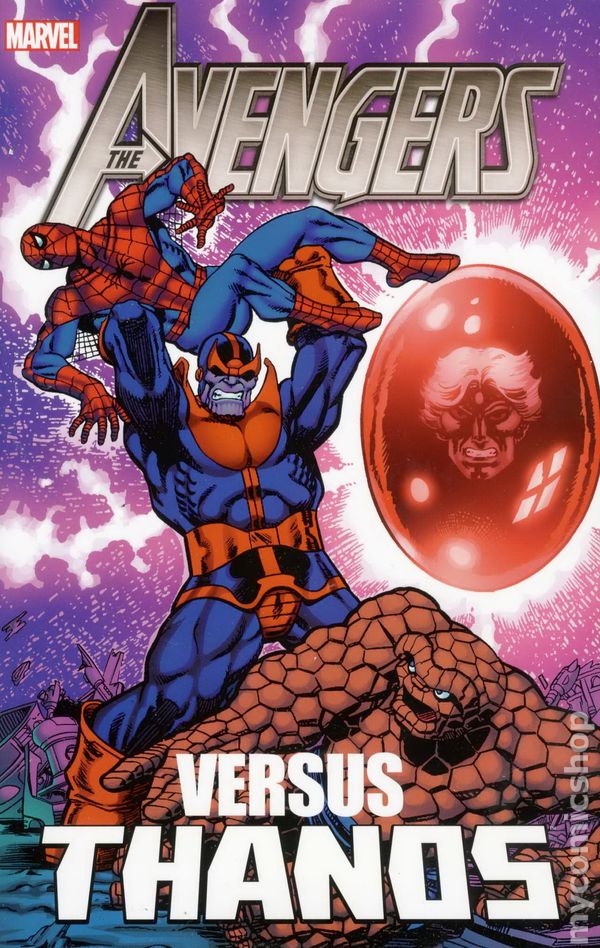 Is there a greater villain than Jim Starlin's Thanos? To me, he's right up there with such classic baddies as Doctor Doom, Galactus, and Darkseid, and his twisted psyche sets him apart from even those Gods of Evil, placing him at the head of the bad-guy table.
THE AVENGERS VERSUS THANOS collects every appearance that Thanos made prior to his first death, and includes IRON MAN #55, CAPTAIN MARVEL #'s 25-33, MARVEL FEATURE #12, DAREDEVIL #'s 105-107, AVENGERS #125, WARLOCK #'s 9-11 & 15, AVENGERS ANNUAL #7, MARVEL TWO-IN-ONE ANNUAL #2, and material from LOGAN'S RUN #6, complete with covers and an extensive gallery of covers from various other reprints and obscure Thanos-related pin-ups and handbook portraits. This is a big, chunky book (472 pages!), and you'll get a lot of bang for your $34.99.

I had read most of these when I was a kid, thanks to Marvel's THE LIFE OF CAPTAIN MARVEL and WARLOCK SPECIAL EDITION reprints, but it's nice to have the whole saga collected in chronological order, along with a few issues (The DAREDEVIL and AVENGERS issues, and the LOGAN'S RUN story) that weren't included back then. The collection itself is beautiful, and Marvel really pulled out all of the stops, as far as production values go.

Jim Starlin is an amazing talent, and it's fascinating to watch his writing and storytelling evolve over the course of his early efforts. His work took on deeper themes and more complex psychological issues as he matured, and his art also reflected his growth.

It's easy to see why the DAREDEVIL and AVENGERS issues remained uncollected until now....The DAREDEVIL issues are ridiculously bad, but they feature Moondragon (Called "Madame MacEvil", of all things...), and briefly touch upon the struggle against Thanos, while AVENGERS #125 shows how The Avengers defeated Thanos' army of space-thugs while he was busy becoming one with The Cosmic Cube. None of those four issues added much to the overall story, but it was nice to see them for the first time.

When I was a kid, I marveled at Jim Starlin's grandiosity...This guy created a huge cosmic saga, and dragged it into the mainstream Marvel Universe by including The Avengers, The Thing, and Spider-Man. I now know that he wrapped up Thanos' story in AVENGERS ANNUAL #7 and MARVEL TWO-IN-ONE ANNUAL #2 because WARLOCK had been canceled, and Archie Goodwin graciously offered him the annuals as a place to wrap his cosmic epic up. Either way, he broadened the scope of his story and upped the stakes exponentially, creating one of the most enduring comic-book epics of all time. Highly recommended stuff.