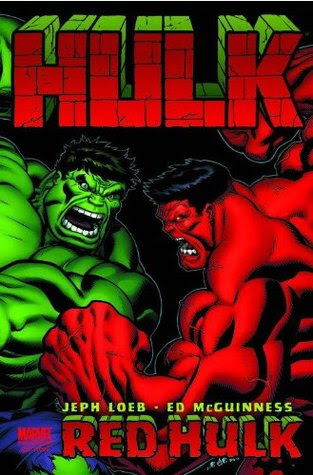 You hear the term "Batshit crazy"  thrown around a lot these days. Hell, I throw it around a lot. Until now, everyone that has ever used that term was wrong. Because this, my friends...this, HULK, VOL. 1: RED HULK....this is truly BATSHIT CRAZY!!!!!!!!!
I used to really appreciate the writing of Jeph Loeb, back in his BATMAN: THE LONG HALLOWEEN days. Somewhere along the line, he went off the rails and became a shadow of his former self. So make no mistake...when I tell you that I loved (LOVED!!!) this book, I'm not saying it's well-written.

In fact, it's terrible. It's nothing but people yelling, and giant monsters beating the shit out of other giant monsters and various and sundry other super-powered people. It reminds me of the comics I created when I was a kid....I didn't have the time or the patience for things like characterization or motivation, so I just cut to the chase and drew brutal, violent fights.

It's basically a series of fights, each crazier than the last. But the secret to this book's success is the art, by Ed McGuinness. I'm a complete mark for McGuinness' huge, cartoony art style..In fact, it's the entire reason that I bought the book. And on that count, I wasn't let down at all.

The story, such as it is, finds Bruce Banner locked in a vault miles underground after the events of WORLD WAR HULK, and a new Hulk (The titular "Red Hulk") on a violent rampage around the Marvel Universe. Who is this new Hulk? I already know, since this book is over six years old, and knowing what I know, nothing about any of the clues seeded in this book makes any kind of sense. The dialogue is childish and painful to read. But....the art....the epic, widescreen fight scenes. If you've ever been annoyed by The Watcher, and wished someone would just paste him one in his huge, stupid face...well, wish no more. That's all I really need to say, I think.

THE RED HULK KNOCKS OUT THE WATCHER!!

AND LOOKS UP HIS LITTLE DRESS!!!

Check your brain at the door, enjoy the pretty pictures, and have fun. Because this is a big, loud, dumb smash-fest, and if you can't enjoy one of those every once in a while, then turn in your man-child card.

HULK, VOL. 1: RED HULK collects HULK #'s 1-6, complete with all covers and variants, a handful of "Little Hulk" comic strips, and the back-up story from WOLVERINE #50.

Posted by The Crabby Reviewer at 2:39 PM