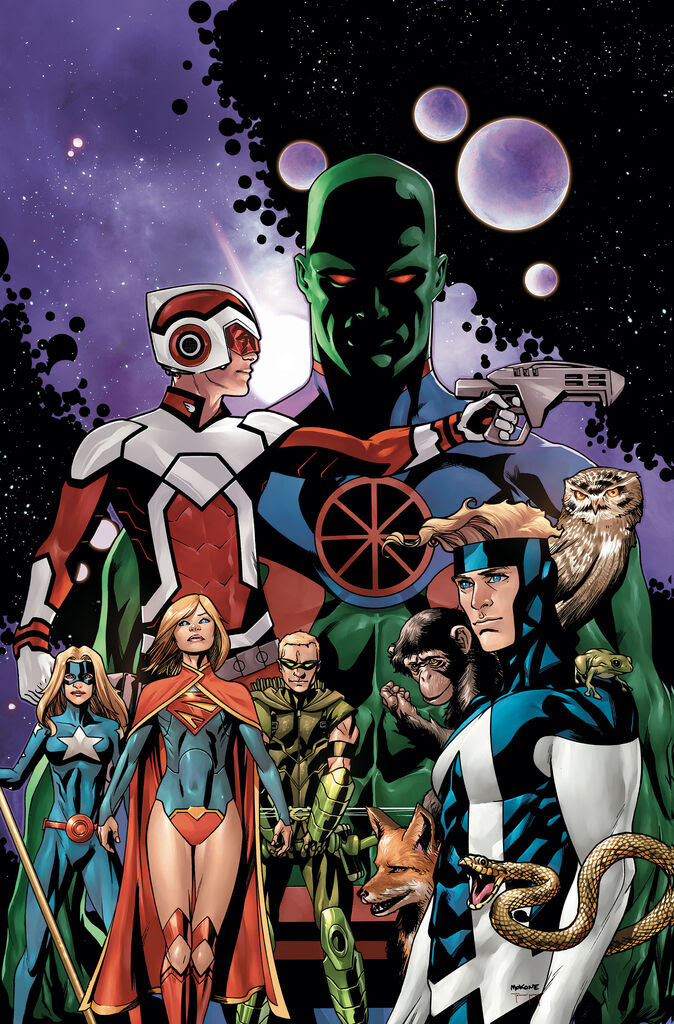 In the tradition of Marvel's "Great Lakes Avengers" comes a Canadian Justice League.....Yay.

I've already written off 95% of DC's current output as just not being for me, and I'm especially critical of the work of writer Jeff Lemire, whose "New 52" stories have left me totally underwhelmed. The premise of this book did intrigue me, though...It seemed like it could be a lighthearted book that just might surprise me with it's odd assortment of characters. There was, however, nothing lighthearted about JUSTICE LEAGUE UNITED, VOLUME 1: JUSTICE LEAGUE CANADA....Indeed, it slavishly follows in the bloody footsteps of many other recent DC books.

The book starts off in mid-story, with the freshly-minted team (The Martian Manhunter, Animal Man, Green Arrow, Supergirl, Stargirl, Hawkman, and Adam Strange) in deep space, attempting to stop the mad Thanagarian Byth, who has just created a hybrid being who will become Ultra, The Multi-Alien (How's THAT for a blast from the past.....?), and Byth's underling, Lobo. We then backtrack to find out how the team was formed and how they ended up in space. There's also a wholly uninteresting subplot about a Native Canadian girl who will become a heroine named Equinox, which I learned from the back cover copy....it's not mentioned at all in the story. (I found the Equinox story arc to be very derivative of Lemire's use of Raven in his awful TEEN TITANS: EARTH-ONE graphic novel.)

My main beef with this story, aside from how turgid, boring, and lifeless it was, centers on Lemire's use of Hawkman, or as I like to call him "The guy who perpetually fucks up DC continuity." Lemire has Hawkman face Lobo, which ends with a gory arm-severing (Every "New 52" book must feature at least one limb or head being brutally removed from it's body, so Lemire does manage to meet his quota.), He follows this up with Hawkman's death in a reactor explosion. I know there's no way he's going to stay dead, but honestly....with the truly fucked-up continuity that Hawkman had in the real DC Universe, did he really need to go there? "The New 52" gave Hawkman a fresh start, so....let's have a death and inevitable resurrection to muddy the waters! Yay!!!

That aside, this book was a totally lifeless affair. The word that springs to mind to describe it is "Joyless". This feels like something that was churned out by committee, and there were soooo many missed opportunities for some levity or fun character interactions, but we get nothing. Lemire gives Adam Strange a new origin that actually manages to make an already boring character even more boring, and I just cannot get used to Green Arrow being a kid no matter how many times I try. This is just awful, awful stuff. Even the usually dependable Mike McKone can't save this mess. McKone uses a new art style here, and it's just generic and bland enough to fit Lemire's blah story to perfection. (McKone has been around for decades, thanks to his ability to reinvent his art every few years, but this reinvention needs to be uninvented, ASAP.)

The saving grace of JUSTICE LEAGUE UNITED, VOLUME 1: JUSTICE LEAGUE CANADA was its extensive variant cover gallery. When the best thing you can say about a book is that it had a nice selection of variant cover art, well....that ain't good. I used to pine away for the "Old" DC  Universe, but as more and more time goes by, I stop thinking it may ever come back and just find myself relegating DC and it's characters to my past. If Marvel reboots, I think that'll be all she wrote for my current comic reading.


Posted by The Crabby Reviewer at 3:37 PM