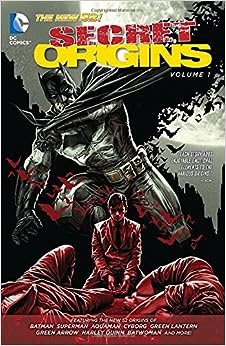 DC resurrects an old favorite of mine, SECRET ORIGINS, now with a "New 52" twist.....

I've gone on the record as not being a fan of DC's "New 52"...It's basically erased all of the stories that I spent my whole life reading, and it's caused me to drop virtually all DC Comics from my buy list. That said, I do still find enjoyment in the occasional DC title, and SECRET ORIGINS, VOLUME 1 is one of those rare enjoyable DC books.

This volume collects SECRET ORIGINS 1-4, and it covers a nice range of DC's heroes and villains. Some stories resonate more deeply than others, and there really wasn't a lot here that I didn't already  know, but I still had a good time reading the short origin stories, and seeing different writers and artists put their stamp on things.

The origins covered in this volume include::
Superman, in a touching story by Greg Pak, Lee Weeks, and Sandra Hope. (Can anyone tell me the "New
52" fate of Ma & Pa Kent...? They look like murder victims here....) I didn't really like the way that Superman's "New 52" origin has him being born on Krypton again. I think it was John Byrne that retconned it so that Superman was put into a birthing matrix, which made it so he wasn't actually born until he arrived on Earth and was released from the Kryptonian ship. That origin made him an Earthman. This way, he's an alien. Small difference, but it's a big deal to me, and it stuck in my craw. Otherwise, Pak did a great job showing the loving parents that made Clark Kent into a true Superman.

Nightwing, by Kyle Higgins, Doug Mahnke, Keith Champagne, and Christian Alamy. Nice story and art,
and they finally explain why he picked "Robin" as his name. Good stuff.

Supergirl, by Tony Bedard, Paulo Siqueira, and Hi-Fi. This was the weakest story in the book. I don't
know if this has always been the case, as I've never really been a big Supergirl fan, but I got a kick out of the fact that she's actually older than Superman, at least technically.

Batman, by Ray Fawkes, Dustin Nguyen, and Derek Fridolfs. Standard Batman origin...we've all
read/heard/seen this one a billion times before, and this telling added nothing, except it kept Scott Snyder's ruination of the classic "I shall become a bat...." moment.

Aquaman, by Jeff Parker, Alvaro Martinez, and Raul Fernandez. I dropped AQUAMAN when Geoff
Johns left the book, and this tale by Jeff Parker made me regret that decision. While I didn't get anything new out of this origin story (I had already gleaned all of it from Johns' run...), it was still extremely well-told.

Starfire, by Scott Lobdell & Paulo Siqueira. I was not too thrilled with Starfire's "New 52" portrayal, so I
was surprised at how much I enjoyed this story, especially considering the fact that it was written by Scott Lobdell, who I consider to be one of the worst writers ever to darken the pages of a comic book. The story sticks pretty close to the Marv Wolfman origin, and I liked the spin that was put on the Starfire/Komand'r relationship.

Green Lantern, by Robert Venditti & Martin Coccolo. Nothing new here whatsoever. Standard stuff, told
in a standard way. Not bad, but entirely skippable. (I've always been bothered by the fact that Abin Sur dies in a spaceship crash. He is probably the only Green Lantern to ever use a spaceship, and he dies in it when it crashes...? Talk about bad luck....)

Batwoman, by Jeremy Haun & Trevor McCarthy. A rushed Cliffs Notes version of Greg Rucka's origin
story. Another one you could skip entirely.

Red Robin (Yummmmm!), by Scott Lobdell and Tyler Kirkham. Now THIS is the Lobdell I know
and....umm....know. Sloppy, aimless storytelling, and one of the stupidest story conceits I've ever encountered. (I applaud Lobdell for not merely killing off Tim Drake's parents to make the story easier, but I'm a parent, and if I were ever sent into witness protection, I certainly wouldn't go without my child, let alone leave that child with a strange, reclusive billionaire who seems to collect children.)

Green Arrow, by Jeff Lemire, Denys Cowan, and Bill Sienkiewicz. This one puzzled me, as it was written
by Jeff Lemire, who turned Green Arrow's origin upside-down and inside-out during his run on GA's book, but no mention is made here of the horribly cliched "My whole life is a lie! I've been manipulated by shadowy forces since birth!!!" nonsense. This was pretty blah, and I still hate the fact that Green Arrow is young and non-curmudgeonly.

The package is rounded out by four gorgeous Lee Bermejo covers, and one Andy Kubert variant cover.

All in all, this would be a worthwhile purchase, especially since DC eschewed a hardcover and went straight for the affordable trade paperback. Not a great book, but better than most of DC's recent output.


Posted by The Crabby Reviewer at 1:38 PM