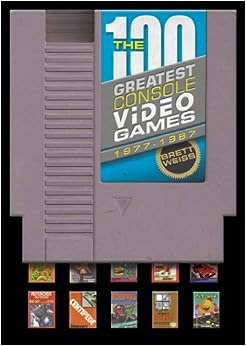 Author Brett Weiss seems to have the same background as me...raised in the '70's, haunting corner stores and pizzerias to find arcade games, and owning, or knowing someone who owned, virtually every home gaming console. My father purchased an Atari 2600 for me shortly after it was released, and my poor mother fed my game addiction, eventually buying me a Colecovision, an Atari 5200, and an NES. I was a true child of the video game age, and thus a perfect target for a book like this.

First off, I have to say that the publisher, Schiffer, makes some great looking books. Having already reviewed one of their previous publications (PUMPKIN CINEMA: THE BEST MOVIES FOR HALLOWEEN, by Nathaniel Tolle), I can safely say that I am a fan of their chunky, oversized hardcovers. As with PUMPKIN CINEMA, THE 100 GREATEST CONSOLE VIDEO GAMES: 1977-1987 is printed on beautiful glossy stock and lavishly illustrated. It's a real joy to hold and flip through, and people who love actual, physical books will love the look and feel (And smell...yes, I like the way real books smell!) of this one.

As for the contents, Brett Weiss states up front that this is a personal top 100, and, as such, you may or may not agree with his picks. (I disagreed with a lot of them, but more on that later.) Whether you agree or disagree, he presents his top 100 in a thoughtful, entertaining way, and makes each entry fun to read, so you'll enjoy each chapter no matter if it's an old favorite of yours, or a game you've never heard of before.

If I had one complaint with the book, it would be in Weiss' choice of illustrations. The book is filled with box-cover art (Some of them quite lovely, especially the classic Atari covers) and pictures of instruction manuals and back covers, but pictures of the actual games themselves, meaning screen-shots, are few and far between. Photos of actual gameplay would have gone a long way towards making his descriptions of the game mechanics and characters for the less well-known games a lot easier to understand. It's a small quibble, since I was pretty much able to find play-through videos of all of these games on YouTube that satisfied my curiosity, but still...it would have been nice to have some pictures of the actual game itself.

As for Weiss' picks, I disagreed with a lot of them, but that's part of the fun of a book like this. Like I said, I was an early owner of the Atari 2600, but even then I knew that a lot of the games he so fondly remembers were duds. COMBAT...? Really...? I can get behind including a game because it's historically important, but you'll never be able to convince me that a game like COMBAT or ADVENTURE were actually fun to play....I also took issue with the way that he listed so many games that are, at heart, rip-offs or variations on the same theme. GALAGA, DEMON ATTACK, and PHOENIX are, essentially, the same exact game. (DEMON ATTACK in particular, which is a straight-out theft of PHOENIX, should not have been included.) This was, however, great fun to read, and this particular stroll down memory lane has prompted me to go out and buy some classic arcade compilations for my neglected old PSP. Highly recommended for fans of old video games.

Posted by The Crabby Reviewer at 8:58 AM