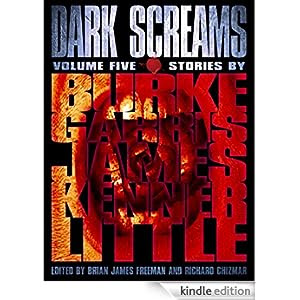 The DARK SCREAMS series comes to an end that's more whimper than bang.....
I've been a fan of the series so far, and this volume is not bad, but it's not especially memorable, either, and it's a shame to see the series close out on a low note.

As usual, this volume contains five short stories, written by a mix of old favorites and newcomers you may not have heard of yet. Unlike the previous four volumes, this one appears to be comprised of entirely new material.

The book starts off with EVERYTHING YOU'VE ALWAYS WANTED, by Mick Garris. Garris, best known as a Writer/Director, has been cranking out fiction recently for Cemetery Dance Publications. I'm not much of a fan of his prose, but this story, about a has-been Horror-movie Director at a Midwest convention, started strongly and kept me interested for a while. Unfortunately, Garris couldn't find the end of the story....It takes up nearly a staggering 65% of the book. And when he does find the end, after dozens upon dozens of pages of wheel-spinning, it's one that any reader even remotely familiar with Horror could see coming a mile away. This could have used some major editing.

Next up is THE LAND OF SUNSHINE, a bizarre, dreamlike story written by the always rock-solid Kealan Patrick Burke. I'm kind of biased against stories like this, but I did enjoy Burke's prose, if not the storyline itself. It was a rare misstep, at least as far as personal tastes go, by someone who I consider to be a modern master. Not bad, but not really my cup of tea.

Del James's MECHANICAL GRATITUDE is a sloppily told story about a man and his car that would be right at home in a second-rate EC Comics clone. Again, not bad, but nothing remotely original or even well-written.

Things go from bad to worse with J. Kenner's  THE ONE AND ONLY....I am totally unfamiliar with J. Kenner's work, but a quick search reveals her to be a very prominent author of romance novels that feature shirtless guys on the cover, as well as "Paranormal Romance" books. This reads like something written by someone who has never read a Horror story in their life, who thinks they've come up with a really original spin, when in reality it's something that any genre fan could predict, note for note. I have no idea how such a bland, lackluster story passed muster to make it into this publication.

The book finishes strongly with THE PLAYHOUSE, a bizarre story about a realtor who encounters a haunted (?) child's playhouse in the yard of a house she's showing. It's another Bentley Little "The..." story, and there's not much that I can say about it without giving too much away. I will say that I'm a fan of Little's writing, and more often than not, his stuff works for me. This one was no exception. THE PLAYHOUSE falls more on the bizarro side of his fiction, so your mileage my vary. I loved it, and thought it was a great story to close the series out on.

Overall, the DARK SCREAMS series has been more hit than miss, and I hope that Editors Brian James Freeman and Richard Chizmar give some thought to publishing future volumes.


Posted by The Crabby Reviewer at 1:39 PM