Star Trek/Planet of The Apes: The Primate Directive 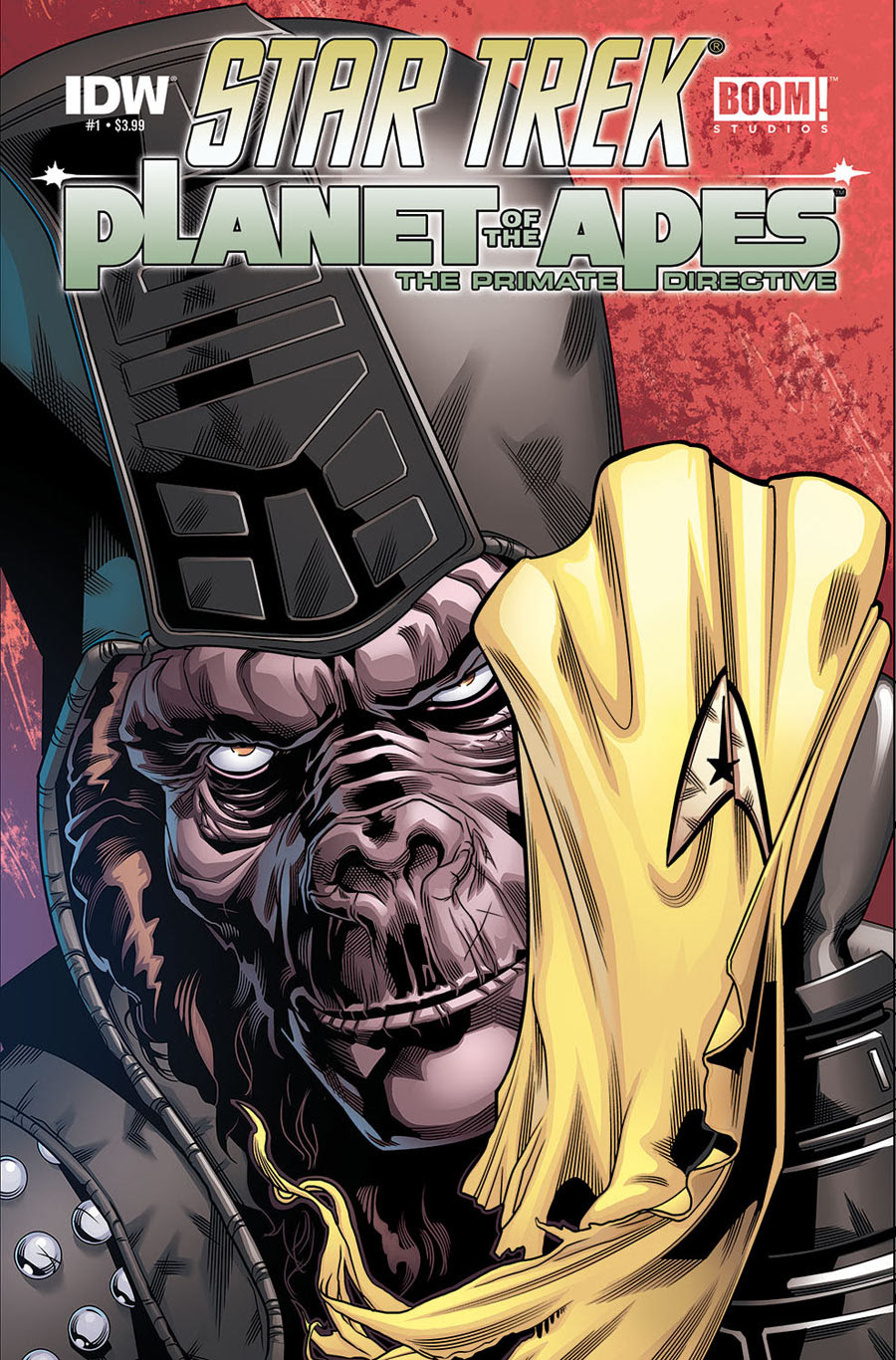 The crossover that I never wanted has arrived!
And I mean that in a GOOD way.

I've been a fan of both franchises since a very early age. I grew up watching nightly STAR TREK reruns on Channel 11 in New York, and the PLANET OF THE APES films are seared into my mind as if they were branded there. All five films were mainstays on Channel 7's "4 :30 Movie", and many were the days that I subjected my poor Grandma May to yet another viewing of these apestravaganzas. My father even took me to see a ten-hour, five-film ape marathon when I was 5.

And in all that time, it never occurred to me that these two franchises should meet.

Thank goodness it occurred to someone, though, because it was a real head-smacker when I first heard of the project, a joint publication of IDW and BOOM! Comics: Why had no one thought of this before????

Writers Scott and David Tipton do something wonderful and wholly unexpected: They don't go for a big, bombastic war between the crew of The Enterprise and the planetful of apes. They, happily, opt for a scenario that plays out like an episode of the original STAR TREK series. The crew of The Enterprise, investigating suspicious Klingon activities, stumbles across a Klingon-created hole in space, a rift which leads to an other-dimensional Earth populated by apes. Kirk takes a landing party planet-side to investigate further, and they encounter Charlton Heston's Colonel George Taylor and Nova, who are traveling through The Forbidden Zone following his shattering discovery at the end of PLANET OF THE APES. (For continuity buffs, this story falls within The Enterprise's five-year mission, and between PLANET OF THE APES and BENEATH THE PLANET OF THE APES.) After the initial confusion, Taylor falls in with Kirk and company, and joins them in their attempt to stop a Klingon-armed Ape army from conquering Ape City.

I was never really clear on just how The Klingon Empire would benefit from starting a civil war on a planet in another dimension, but I had so much fun with this story that I just ran with it. The Tiptons have the tone and personalities of the TREK crew down pat, and this really did feel like an episode of the original series. (The story also addressed a couple of nagging APE continuity errors that I've wondered about for decades.) They also succeeded admirably in catching Charlton Heston's abrupt way of speaking, as well as his Kirk-like halting speech mannerisms. It was a blast to see Kirk and Taylor, two fiery hotheads, square off. I also appreciated how they gave each member of the Enterprise crew a chance to shine. (OK, maybe not Chekov so much....) The art, by Rachael Stott, is clear and easy to follow, and she she handled the likenesses nicely, something a lot of artists seem to really struggle with. I had a blast reading this book, and I'd love to see a sequel, hint hint hint...

STAR TREK/PLANET OF THE APES: THE PRIMATE DIRECTIVE collects the five-issue mini-series of the same name. IDW/Boom! provided a review copy.