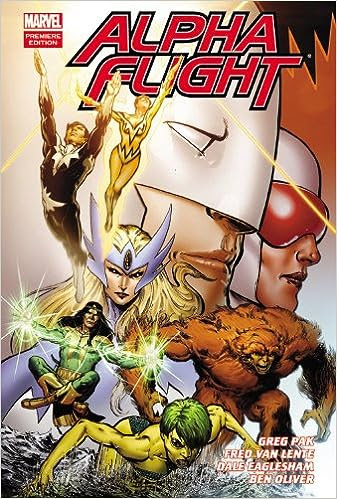 I've been reading comics for most of my 45 years, and I've taken a lot of crap for reading them. I've also gone out of my way to defend them as literature and as a valid art form. Reading ALPHA FLIGHT BY GREG PAK AND FRED VAN LENTE, VOL. 1 was enough to make me think "Why did I bother....?"

I've given books like WATCHMEN and THE KILLING JOKE to friends and relatives that I thought might be interested in comics if they had a proper gateway. I don't think any of these potential fans ever really took to the hobby, but they learned that there was good, solid, grown-up stuff being done with the medium, and they got at least one enjoyable read under their belts. Having done that, I always look at every comic I read with this question in mind: If I were totally unfamiliar with this book and these characters, would any of this make sense to me? With this book, the answer was a resounding NO.

I've been a fan of ALPHA FLIGHT ever since I traded for a battered, coverless copy of UNCANNY X-MEN #121 back in grade school. I loved John Byrne's run with the team's book, and I even stuck with Mantlo/Mignola/Isherwood for their run. After that, I jumped ship, and, while I dropped in occasionally for various relaunches and reboots, I never stuck around, and I never felt like I was missing anything.

That said, I am fairly conversant with the characters and their personalities, if not their exact situation at the time of the FEAR ITSELF crossover, which this book is a part of....and, I have to say, if I didn't have a pretty good grasp on these characters, I wouldn't have a fucking clue what was going on in this book, and I wouldn't give much of a fuck, either.

Writers Greg Pak and Fred Van Lente do not waste one single, solitary sentence on backstory. (Who are these people? Weren't they kind of dead? How are they alive again? Are Guardian and Vindicator a couple? How did someone else get custody of their baby daughter? Who is that short guy, and why does he claim to have just escaped from Hell? These are just some of the many questions that will not only go unanswered, they will also go unasked! New readers beware!!!)

The book takes place during the FEAR ITSELF crossover, which also goes unexplained...you either just run with all of this, or you let it stop you dead. I ran with it, and I probably had just as shitty a time as a total newcomer would have had. This is a truly embarassing, atrocious book. The characters that I knew and loved from the John Byrne era are gone, represented here by a group that have undergone radical personality changes, and all speak in the same "voice"......sloppy writing that makes every character sound exactly the same. This is a stupid, relentlessly bad relaunch.....avoid at all costs. (I do need to recognize that the art, by Dale Eaglesham, is wonderful, as are the Phil Jiminez covers, but without a readable story, good art is kind of left to flounder on it's own.)

ALPHA FLIGHT BY GREG PAK AND FRED VAN LENTE, VOL. 1 collects ALPHA FLIGHT #0.1 and 1-4, and features all covers and variants, as well as some interview material from issues 0.1 and 1. I was really looking forward to this book and hoping for a hidden gem that would bring these beloved characters back, but....this ain't it.