The Hardcore Truth: The Bob Holly Story, by Bob Holly and Ross Williams 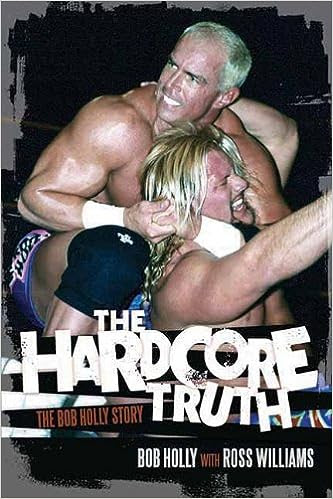 As a longtime wrestling fan, I have fond memories of Bob "Hardcore" Holly, from making fun of him when he first debuted in The WWF as "Thurman "Sparky" Plugg", to marking out for him when he transformed into the badass "Hardcore" Holly. He was never a top guy in the promotion, but he often ended up delivering one of the best matches on cards that featured him. You could tell he was a legit tough-guy, and that he always gave 110% in his matches.

Hardcore Holley, A.K.A. Bob Howard, along with collaborator Ross Williams, have penned a wildly entertaining autobiography called THE HARDCORE TRUTH: THE BOB HOLLY STORY, and you can tell that Bob is done with the business, because he, in true hardcore fashion, holds nothing back.

The book covers Hardcore's entire life, from childhood to retirement, with special attention given to his WWF/WWE tenure. There's a lot of fascinating stuff here, most of which fans will probably have suspected (HHH is an egomaniacal jerk being the least shocking revelation...), but no one has ever had the guts to actually say. Hardcore gives his take on everyone he worked with, and it's a surprisingly well-rounded take....He talks about the bad, but also talks about the time HHH stuck up for him, or paid for all of the boys to visit a zoo on an Australian tour. This level of candor is unusual, considering that no one ever seems to really be done with the business, what with WWE's "Legends" contracts, Hall of Fame induction, and spotlight DVD money on the table. Hardcore was wise with his money, and was able to walk away with enough of a nest-egg to enjoy retirement. He even has an out-of-left-field, honest-to-goodness happy ending that brought a smile to my face.

In the years since his retirement, I've heard a lot of stories that painted him as a bullying, spiteful prick, and the opening chapter of this book did nothing to dispel that aura. (The book opens with Hardcore beating the shit out of rookie wrestler/future literary collaborator Ross Williams, chopping him until his chest was a bloody mess, and slapping him so hard that his eardrum ruptured.) Hardcore seems like a man who lived his gimmick, but the book reveals the human side of his personality, and when the book ended with "How do you like me now?", I had to say that I like the guy a lot. He made a living in probably the roughest profession out there, worked his ass off, and walked away clean. Probably the best thing I can say about this book is that I read the majority of it in Doctor's offices and Hospitals, before, during, and after nerve-wracking tests and procedures, and Hardcore managed to take my mind off of where I was, make me smile, and even laugh my ass off with one classic story about wrestling Al Snow. Hardcore Holly tells a hell of a story, and I had a blast reading this book.

Posted by The Crabby Reviewer at 11:07 AM