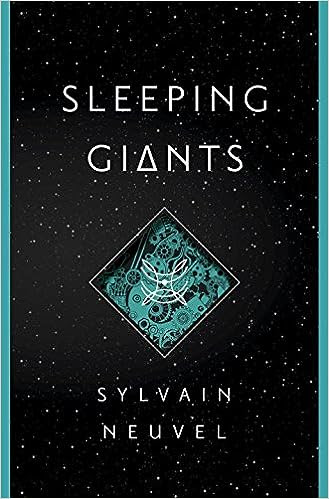 
I'm almost tempted to call SLEEPING GIANTS the thinking man's Voltron. The novel, told through transcripts of interviews, recorded transmissions, and debriefings, concerns the discovery of parts of a giant robot that have been buried for, potentially, thousands of years. As the story unfolds, we follow Rose Franklin from her inadvertent discovery of the first piece, a gigantic hand that she stumbled upon as an eleven-year-old, to eventually heading up the research team that is working on the hand as an adult. Rose discovers a way to find the rest of the missing pieces for Uncla Sam, eventually assembling the giant war machine. The bulk of the book revolves around the search for, and eventual discovery of, the remaining pieces, but the epistolary nature of the story allows for a much faster pace than you would find in a more traditional novel. As fascinating as the science is, the book picks up substantially in its latter third, as we discover more about the origin of the giant, and various other parties come into play attempting to claim it for their own.

Author Sylvain Neuvel has delivered a fascinating debut novel...It is, by it's episodic nature, a bit choppy at times, and since it's the first part of a series (The Themis Files), there are a lot of unanswered questions to be followed up on, but the last chapter left me jonesing for for Book Two, which is a rare thing for me, considering that I generally don't read science fiction. Fans of Voltron, Pacific Rim, and giant robots in general will be in heaven. Highly recommended.

Posted by The Crabby Reviewer at 10:57 AM