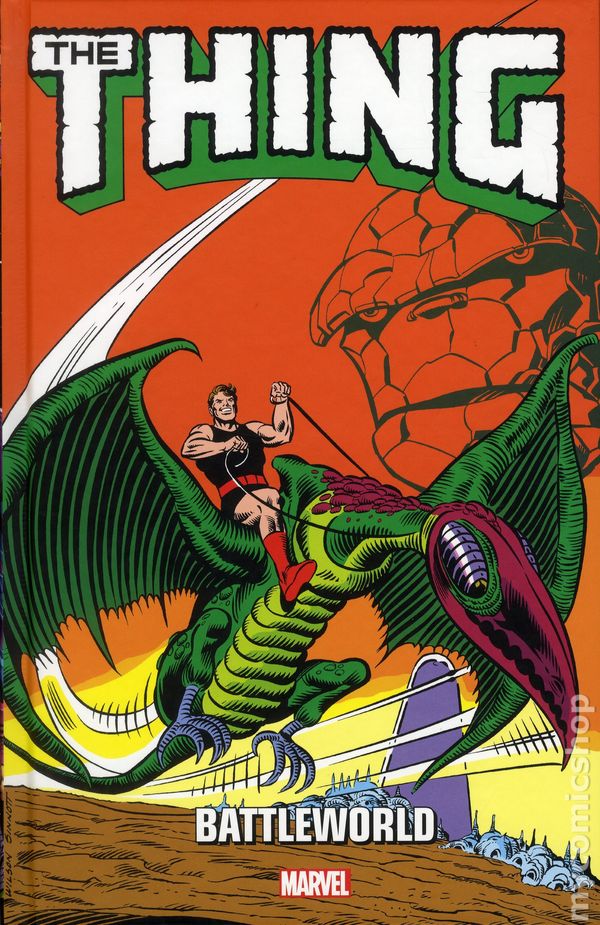 The Secret Wars may be over, but Ben Grimm's troubles are just beginning in THE THING: BATTLEWORLD.

This hardcover, the third book in the MARVEL SUPERHEROES SECRET WARS BATTLEWORLD BOX SET, was previously collected in trade paperback form as THE THING CLASSIC, VOLUME TWO. Both collections contain THE THING #'s 11-22 and FANTASTIC FOUR #274. The hardcover also contains FANTASTIC FOUR #277, which the trade paperback did not, and it's a fitting way to end the collection. Marvel did right by collectors by including it here.

At the end of MARVEL SUPER HEROES SECRET WARS, The Thing, A.K.A. Ben Grimm, decided to stay behind on The Beyonder's Battleworld. Able to return to his human form at will, Ben wanders Battlworld trying to come to terms with his place in The Fantastic Four and his crumbling relationship with blind sculptress Alicia Masters back on Earth.

Battleworld is a strange place, and writer John Byrne sends Ben to a variety of odd destinations, including a replica of Dr. Doom's Latveria, an alien version of Ben's birthplace on Yancy Street, and a region straight out of the old Universal monster movies. Along the way Ben intervenes in an alien inter-species war, encounters other Things, and makes the acquaintance of a warrior-woman named Tarianna, who becomes Ben's traveling companion as he travels Battleworld in search of himself.

Byrne delivers a truly unusual Thing adventure, one that is essentially an epic exploration of Ben Grimm's conflicted psyche. (Byrne takes a few issues off in the middle of the collection, and is subbed by Mike Carlin, who does a good job, and Bob Harras, who doesn't.) The art is provided by Ron Wilson, who was the THING artist in the '70's and '80's. (I was never much of a fan of Wilson's deceptively simple art when I was younger, but as I've aged, he's become a favorite of mine.) Wilson's work has rarely looked better than it does here. He's aided and abetted by the legendary Joe Sinnott, whose think ink lines and clean style really make Wilson's pencils shine. The art reproduction is flawless, and the colors are beautiful and vibrant.

If I had any beef with this collection, aside from the sub-par Bob Harras issue, it was the seemingly aborted Ultron subplot. It's built up almost from the beginning of the collection, but then it just kind of runs briefly alongside The Thing's adventure, and is quickly ended, practically offscreen. I wonder if this was due to the issues that Byrne missed...did the shortened run force him to play out the Ultron story more quickly than he originally intended to? (This is a job for BACK ISSUE! magazine, I think....) Aside from the Ultron fizzle, this is a good, solid, strong collection. The thing that is really striking me about the books from this box set is how self-contained they are....You could probably give them to someone totally new to comics, and not only would they understand what they were reading, getting all that they need to know about the characters and backstory all in one place, but they'd also get a complete adventure, start to finish, that would be quite satisfying on its own. That was the beautiful thing about Marvel under Jim Shooter's editorial regime. This was a fun book. Marvel seems to have stalled out on collecting the rest of THE THING series from the '80's, but I remember the issues that followed Bryne's exit from the series as being a lot of fun. I hope Marvel gets around to finishing up reprinting the series at some point.