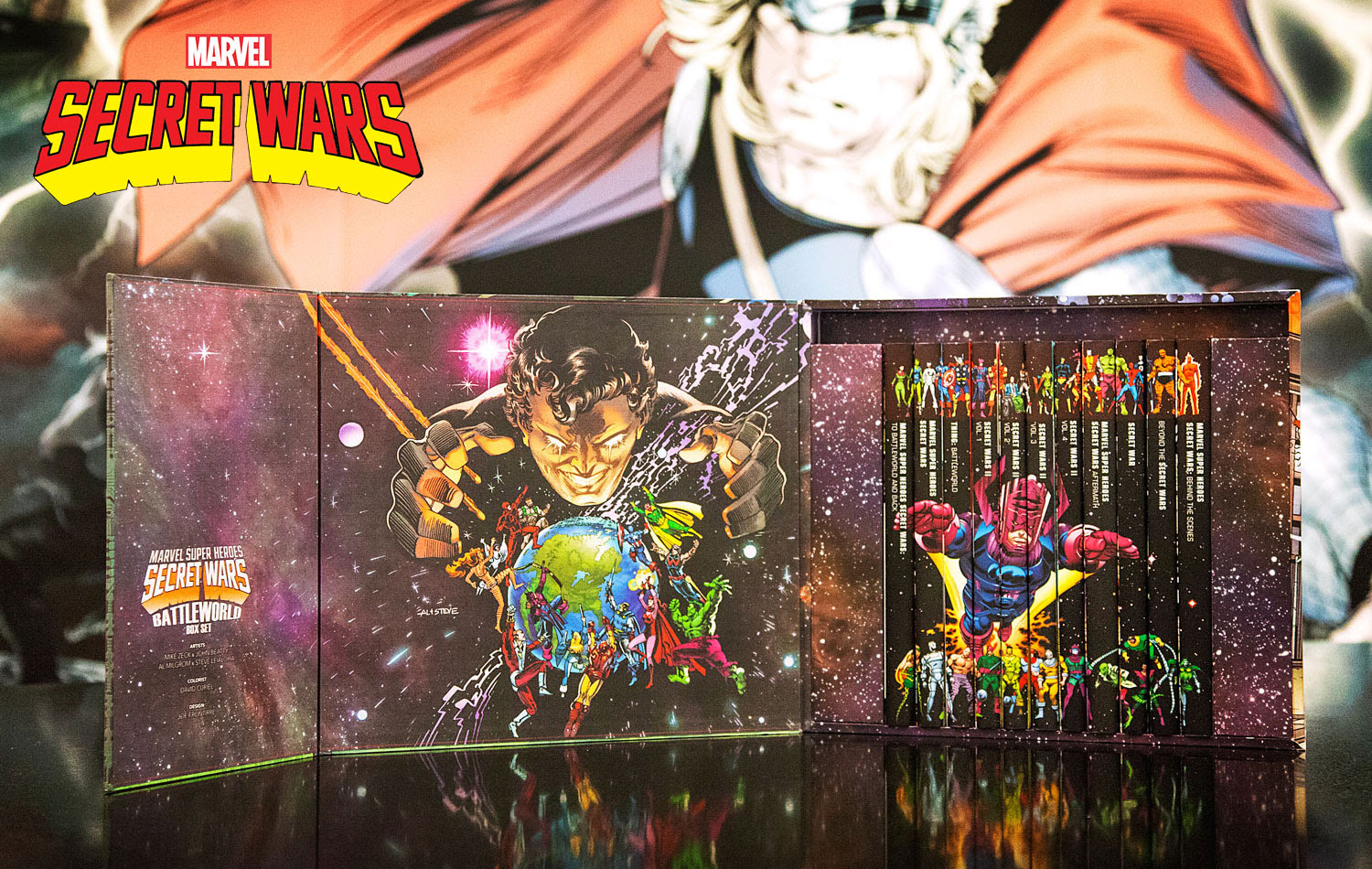 Relive the hype of the first comic-book event crossover!

I was 13 years old when Marvel published SECRET WARS, and the hype machine was in full effect in the halls of P.S. 127 in The Bronx. The seventh grade was abuzz with rumors and innuendo in the months leading up to the mini-series. I remember the thrill when we stopped into a comic store on Fordham Road while on the way to visit my Grandmother. There were no comic stores in my neighborhood yet, so this was a rare event, and it enabled me to snag a copy of SECRET WARS #1 a few weeks before my classmates were able to. I thrilled to the Mike Zeck artwork the whole way to her house, but I put off actually reading the book until I got home, which made for a crappy way to end the weekend, because writer Jim Shooter didn't exactly deliver a story for the ages.

MARVEL SUPER HEROES SECRET WARS: TO BATTLEWORLD AND BACK collects various comics that led up to, and immediately followed, the events of SECRET WARS, and these issues are a blast. For me, the Jim Shooter era of Marvel Comics will always be my sweet spot. Marvel was publishing some great books in those days, and there were some legendary runs by creators who would go on to become giants in the industry: Byrne, Miller, Stern, Mantlo, Buscema, Romita Jr., Gruenwald...I could go on and on.

The thing that really stands out for me about this volume is how accessible these stories are....Someone could come into them completely cold, and get, from any individual issue, a feel for who the characters are, what they're about, their current predicament....pretty much anything you might need to know was provided through thought balloons and brief flashbacks, as well as the ever-handy "Stan Lee Presents" origin box that topped every splash page.

Another thing that struck me was how small the roster of heroes involved in SECRET WARS was. You had The Hulk, Iron Man, Spider-Man, three members of The Fantastic Four, Thor, a manageable number of X-Men, and six Avengers, including Captain America. Any modern event would feature 10 times that number.

The issues presented here are, for the most part, cross-sections of their ongoing storylines, since the actual abduction/return of the heroes usually took up less than a page of each issue.

We get to see Iron Man (James Rhodes) fight The Mandarin, while Tony Stark struggles with alcoholism. Spider-Man has his climactic fight with The Hobgoblin, then tries to reassemble his personal life after returning from Battleworld. The Hulk fights Boomerang, as his psyche slowly begins to unravel. Thor deals with the chore of establishing a new secret identity and faces a massive  foe from his past. The Avengers deal with potential roster changes, The Fantastic Four struggle with relationship issues, and The X-Men face various personal crises before squaring off against a refugee from Battleworld that is trashing Tokyo. The book also presents excerpts from a handful of books that featured important clues to the story, and foreshadowed events that would be important to the series.

This is a hefty hardcover, printed without a dustjacket (The art is printed directly on the book's cover), and the sewn binding lays flat for easy reading. The paper stock is nice, and the art/color reproduction is beautiful. SECRET WARS might not have been a creative milestone, but it is an important part of comic-book history, and this first book from the MARVEL SUPER-HEROES SECRET WARS BATTLEWORLD BOX SET really does it justice. Highly recommended.


Posted by The Crabby Reviewer at 9:43 AM