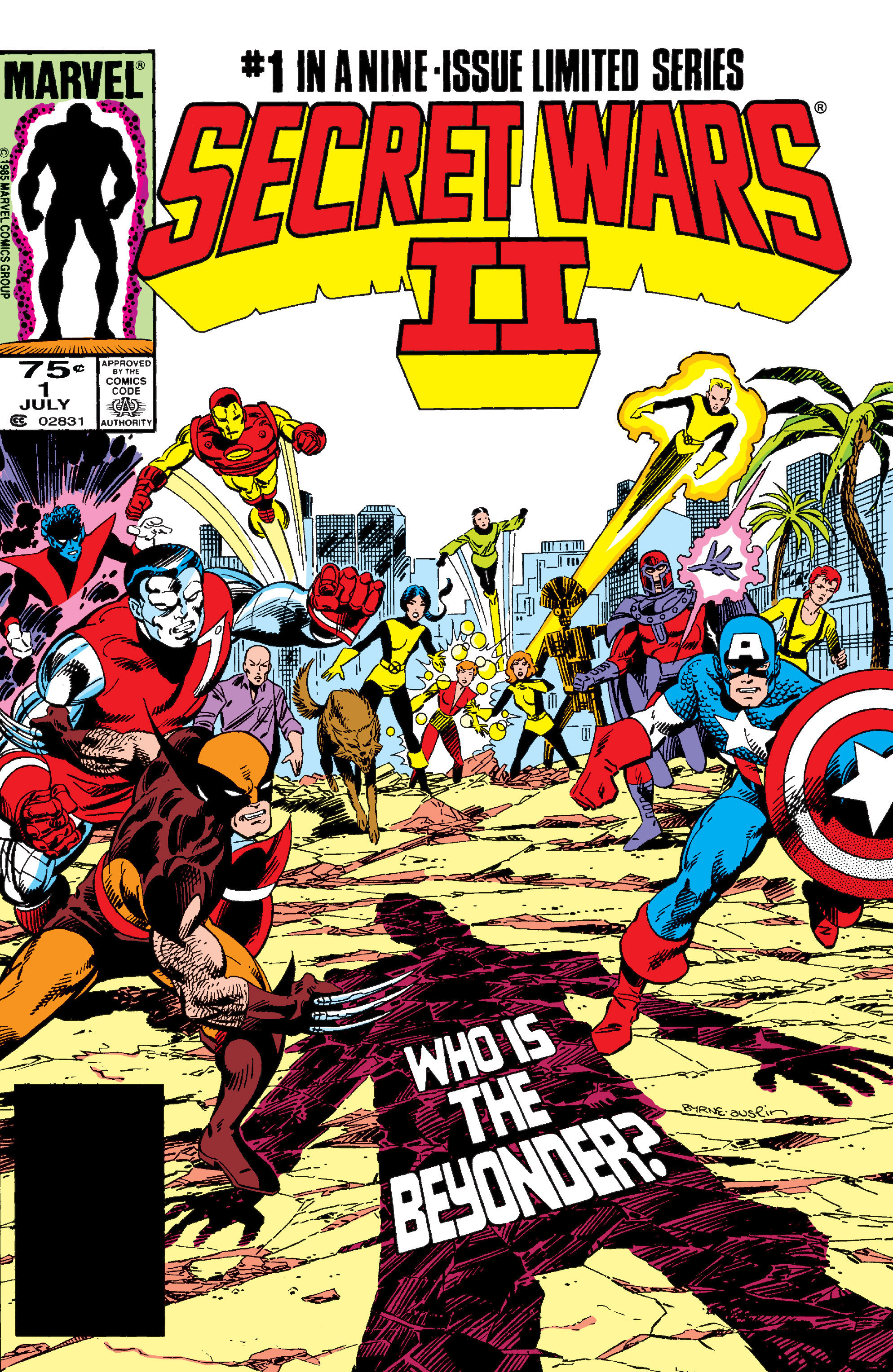 Could SECRET WARS II possibly be as bad today as it was to my fourteen-year-old self...?

Writer Jim Shooter is in full-blown overwriting mode, as each page is filled to bursting with text, thought balloons, word balloons, characters debating the meaning of life, with info dumps and backstories galore...The art is provided by Al Milgrom, one of the most reviled artists of all-time, if modern message-board pundits are to be believed. The main story unfolds in the SECRET WARS II miniseries, and the various crossovers scattered throughout the Marvel line provided varying degrees of actual crossing-over; Some issues saw the storyline being fully embraced, and some would have readers searching through the issue with a fine-tooth comb to find out if and how it truly tied in.

That said....I did enjoy this book a lot more than I did when I read it serially over thirty years ago. (And, yes, I did buy each and every crossover, even the ones that were in books that I hated.)

I've always been a fan of Al Milgrom's art...his look could vary wildly, depending on who was inking him, but there was always an energy and vitality to his work that I enjoyed. SECRET WARS II finds his pencils being inked by Steve Leialoha, a very accomplished artist in his own right. I don't think they're necessarily a good fit, but I was satisfied with the art. The story finds The Beyonder on Earth, trying to learn what it means to be human. Through interactions with the heroes, villains, and common people of The Marvel Universe, he gradually accomplishes that goal, making trouble inadvertently along the way.

SECRET WARS II, VOLUME 1 collects material from NEW MUTANTS #'s 28-29 and UNCANNY X-MEN #195, and the complete issues of SECRET WARS II #'s 1-3, NEW MUTANTS #30, CAPTAIN AMERICA #308, UNCANNY X-MEN #196, IRON MAN #197, WEB OF SPIDER-MAN #6, AMAZING SPIDER-MAN #268, FANTASTIC FOUR #282, and AVENGERS #260. As I said earlier, the degree of actual crossing-over in each book varies. The NEW MUTANTS issue is writer Chris Claremont at his worst, and demonstrates why I dropped all of the mutant books around this time. It's basically a mutant whinefest. CAPTAIN AMERICA fares slightly better, with The Beyonder lurking in the background, but basing his human form on Cap's civilian alter-ego, Steve Rogers. The X-MEN issue finds Rachel Summers briefly interacting with The Beyonder, and the Iron Man issue ties up the loose end of Thundersword, a thinly-veiled swipe at Howard The Duck creator Steve Gerber, from the first issue of SECRET WARS II. The Spider-Man two-parter finds Spidey dealing with the fallout of The Beyonder turning a building in midtown Manhattan into solid gold, and John Byrne's Fantastic Four tale is fondly remembered by me as one of those "Shit, did I get duped!" crossovers that have absolutely nothing to do with the main storyline at all. (There's a one-panel shot of The Beyonder, probably just put in there to get Jim Shooter off of his back.) The book wraps up with a Roger Stern Avengers tale that finds them in space, battling Nebula. The Beyonder briefly appears, but it's pretty inconsequential. The crossovers were mainly fun to me because they provided small glimpses back to books that I collected religiously as a kid, and loved dearly. It was fun getting little slices of what was happening in The Marvel Universe in 1985, such as SECRET WARS II #2 having a cameo by Mark Gruenwald's villain-murdering Scourge of The Underworld. It was also fun to see just how much of a sales-driver John Byrne was...of the eleven issues collected here, SEVEN of them have Byrne cover art. I have vivid memories of buying IRON MAN #197 and being pissed that it didn't have interior art by Byrne. Marvel loved having a Byrne cover to lure the kids in, and it worked like a charm every time...I was duped over and over and over.


Posted by The Crabby Reviewer at 3:27 PM