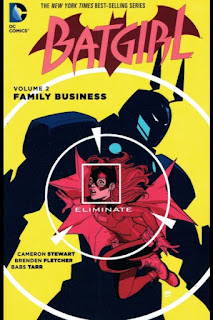 This one book encapsulates a lot of what is both right and wrong with DC Comics since "The New 52" began....

BATGIRL, VOLUME 2: FAMILY BUSINESS collects BATGIRL #'s 41-45, BATGIRL ANNUAL #3, and  DC SNEAK PEEK: BATGIRL #1. I've been enjoying the new direction that Cameron Stewart and Brendan Fletcher have been taking with BATGIRL, and I love the art (By Babs Tarr and Bengal, among others.), but DC continues to act like everyone reading any particular book will automatically know everything that is going on in every other book they publish. In this volume alone, we find Barbara Gordon learning that her father is the new Batman (I knew about this because I just read BATMAN, VOLUME 8: SUPERHEAVY), but a small caption saying WHY Jim Gordon was the new Batman might be helpful, or at least something directing you where to go if you wanted to read the story for yourself. Nope, you're on your own to sink or swim. We then get a near-miss encounter with Barbara's old flame, Dick Grayson, who is believed dead, but is really alive and working for a spy agency in a book that I have no interest in reading. I know the score, but while they're name-dropping the agency he's working for, how about a quick little lesson in who they are and what they do...? Nope. then we get Lucius Fox's son, Luke, who seems to be Batwing, who I thought was an African guy...what happened to him? Is Luke no longer Batwing? I don't know, because DC TELLS YOU NOTHING. Black Canary singing at a wedding...? Why? (I know because I read the first volume of the new BLACK CANARY SERIES, which I did not like.) Dick Grayson shows up again later, and this time he doesn't seem to care WHO knows he's alive. Why is that? I have no idea. There's also a cute crossover with the girls from the GOTHAM ACADEMY series, but no reference is made to that series, so if you're not reading it, you'd have no idea who these kids are, or why they seem to know so much. You either know, or you don't know, but either way, DC doesn't do much to help new, or less continuity-savvy, readers.

This book also hits all of the bases of social justice, with an interracial romance AND a transgender wedding. I consider myself to be especially tolerant and accepting, but I'm at a point now where I just roll my eyes when it seems like a book or movie or TV show is doing all they can to shoehorn in every possible type of person just so they don't get called out for not being all-inclusive. As I said in my review of the first volume BATGIRL, VOLUME 1: BATGIRL OF BURNSIDE, this would have been an ideal book to buy for my daughter, but since the kid squirms and covers her eyes in embarrassment every time there's a kiss on TV, I don't think she'd want to see a lot of same-sex kissing or a transgender wedding, and I definitely don't want to get into any of those conversations with her. She's a kid...she'll be grown-up soon enough. She doesn't need me rushing the process along. Again, no problem with the inclusion of those elements, but they seem slightly out-of-place in a book that looks like it's target audience is teen-aged girls.

This was another fun volume in what has been a successful reboot, but...DC is rebooting itself yet again in a few months, and this iteration of the character will probably be history soon, so...it's almost pointless to read and enjoy something that has no future. Just stick to SOMETHING, DC...anything. Make up your minds.


Posted by The Crabby Reviewer at 2:44 PM