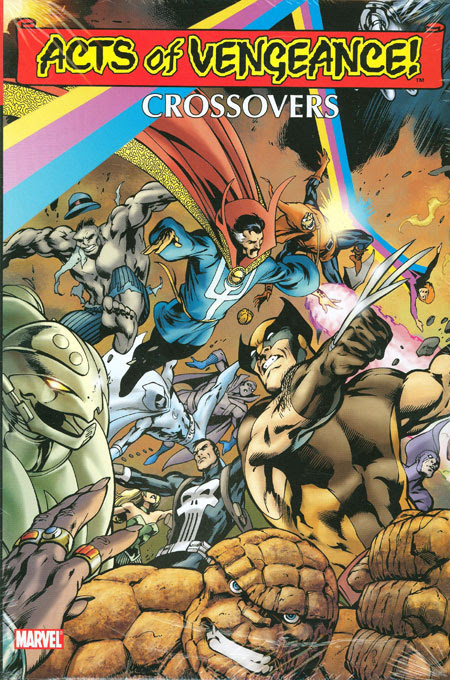 Yes, I'm reviewing the crossovers before I review the main storyline.....

This would, off the top of my head, seem to be one of the most oft-collected eras in Marvel history- I have a huge amount of collected editions that I could have slotted in here, if I were interested in a truly chronological reading experience. (Just off the top of my head, I could have thrown in a volume of THE INCREDIBLE HULK VISIONARIES: PETER DAVID, the Michelinie/McFarlane AMAZING SPIDER-MAN OMNIBUS, the recent PUNISHER WAR JOURNAL collection, the recent SPIDER-MAN EPIC COLLECTION that covered his cosmic-power issues...I could go on and on.) I threw in the towel mainly from exhaustion and burnout: I'm nearing thirty volumes in my AVENGERS binge-read, some of them MASSIVE volumes (Epic collections, Essential volumes, a bunch of omnibus editions), so....I had fun, but I'm ready to move on to something else. I made a last-minute decision to throw these two ACTS OF VENGEANCE collections into the mix, because it seemed like a unique opportunity to read the whole event, in some kind of order, in its proper place in continuity.

While Marvel usually does a great job of placing books in their proper reading order, these two separate volumes created a reading conundrum: How did the crossovers fit into the main storyline? I used the Acts of Vengeance! reading order at http://comicbookreadingorders.com to make my decision for me. They list the reading order as follows:

The immediate problem with this reading order is that some of the books (Notably IRON MAN #250 and CLOAK AND DAGGER #10) aren't included in these collections, and some of the reading orders just make no sense. (They have NEW MUTANTS #86 listed early on, but the story makes it clear that it takes place fairly late in the crossover, and X-FACTOR #50, one of the first books in the suggested reading order, completely blows the identity of the main villain far too early.) Hindsight compels me to say that you should try to follow the order Marvel presents them in, using the reading order as a guide to tell you when you need to flip from book to book. Either way, it's a choppy, often unsatisfying, read.

The main problem with the ACTS OF VENGEANCE! crossover was the lack of a main book, such as a separate min-series that would tell the main story. It's mostly an AVENGERS story, and John Byrne, who was writing THE AVENGERS and AVENGERS WEST COAST at the time, does most of the heavy lifting, plot-wise. But things happen  in one book that totally contradict what happens in another book, which leads me to believe that there is no real "right" way to collect and/or read a storyline like this. Certain books seem to take place in-between panels of another book, so this was never going to be a seamless reading experience, no matter how it was collected or read.

Walter Simonson's FANTASTIC FOUR issues handle the bulk of the government's Super Hero Registration Act sub-plot, which kinda-sorta runs in the background of the main crossover. These three issues are stultifyingly boring, with The FF testifying before congress while a gaggle of grade-z bad-guys take turns attacking the team. Simonson is saddled with the Sharon Ventura Ms. Thing, and a human Ben Grimm who occasionally wears a Thing exo-skeleton. Meh.

The two issues of WOLVERINE take place right in the middle of the Archie Goodwin/John Byrne/Klaus Janson Geist arc, which was already reviewed here earlier in the marathon. It seems like these two issues might seem hard-to-comprehend out of context, but I can't say, since I just read the whole arc a few months ago, and skipped them here.

Roy and Dann Thomas' DR. STRANGE, SORCERER SUPREME confronts The Hobgoblin, The Enchantress, and Arkon, in a trio of overwritten, overwrought snoozers. I'm not a fan of Roy Thomas, aside from his Conan work, so your mileage may vary. Hard to slog through.

Peter David contributes a fun Hulk tale that pits him against The Grey Gargoyle, with art by Jeff Purves and a cover by the legendary Gene Colan.

A quartet of Punisher stories comes next: Mike Baron writes the two PUNISHER issues that find him squaring off against Doctor Doom, which are mainly awful. Baron is a terrible writer, with some of the most leaden dialogue I've ever read. I was never a fan, even as a kid. These issues do not hold up well. The two Carl Potts-scribed issues OF PUNISHER WAR ZONE fare better, as The Punisher faces X-Men foe Bushwacker. It was fun seeing The Punisher get his ass thoroughly kicked, then watching as he turned the tables on his tormentor. Potts made me laugh out loud when The Punisher is yelled at by Bushwacker's wife over his violent ways, and he responds with
"Shut up. Back off. You live with, aid, and abet an assassin for hire. You're no angel." The art, by Jim Lee, Al Milgrom, David Ross, and Russ Heath, is great. These two issues almost canceled out the horrible Mike Baron issues.

Next up are three issues of Chuck Dixon's MARC SPECTOR: MOON KNIGHT, two of which are a Punisher crossover, which didn't work for me at all. Oddly enough, the third issue, which finds Moon Knight under attack by Killer Shrike, The Ringer, and Coachwhip, was a blast. Go figure.

Two DAREDEVIL issues by Ann Nocenti, John Romita, Jr., and Al Williamson feature Daredevil fighting a soul-searching new version of Ultron, which is probably the oddest match-up that ACTS OF VENGEANCE! delivered. I'm not a fan of the Nocenti DD run, but these two quick, brutal issues were fun to read, if really odd and trippy.

This is followed by two totally bland, generic issues of ALPHA FLIGHT written by James D. Hudnall...even the art is blah. No one has ever done anything good with Alpha Flight besides John Byrne. Eech.

The three-issue UNCANNY X-MEN arc by Chris Claremont and Jim Lee is...wow. What the fuck happened here? I have only the vaguest idea of what was going on...combine Chris Claremont's overly-complex, inbred mutant angst stories with his love of Asian crime and ninjas, throw in some Mojo and Spiral, add a dash of strange race-swapping, odd hallucinations, and weird flashbacks, and you get......Psylocke changing from a prim-and-proper British woman to a violent Asian assassin? I would LOVE to find out why Claremont decided to make Psylocke Asian. Definitely the weirdest thing that ever happened in a weird run on a weird book.

The brief excerpt from X-FACTOR #50 totally ruins the surprise of who the big bad of ACTS OF VENGEANCE! is, in case you didn't already know. It was, however, fun seeing him face off against Apocalypse.

The four-issue DAMAGE CONTROL mini-series has some good gags, and sort-of answers how some of the major damage done by the crossover was repaired behind-the-scenes. I'm surprised this series hasn't been done as a TV show or a movie by Marvel Studios...it would seem like a no-brainer.

The book concludes with a great two-parter from WEB OF SPIDER-MAN #'s 64-65, which features Spidey facing all of his ACTS OF VENGEANCE foes once more, without the benefit of his cosmic powers. This was really a great era for Spider-Man stories.....great creative teams working in synch across all three Spidey titles, with actual supporting characters and ongoing subplots. Glorious stuff!

Extras include a Wolverine pin-up, a few Punisher's Arsenal pages, two DAMAGE CONTROL character bios, John Byrne's covers from both ACTS OF VENGEANCE OMNIBUS editions, a combined two-page spread of Alan Davis' covers for both books, and an art process page with pencils for the covers.

Overall, not a book that is going to light your world on fire, but I always have fun dipping in and out of old series and getting a small slice of what was going on in them back in the old days. Even the bad issues had their share of fun.


Posted by The Crabby Reviewer at 2:45 PM