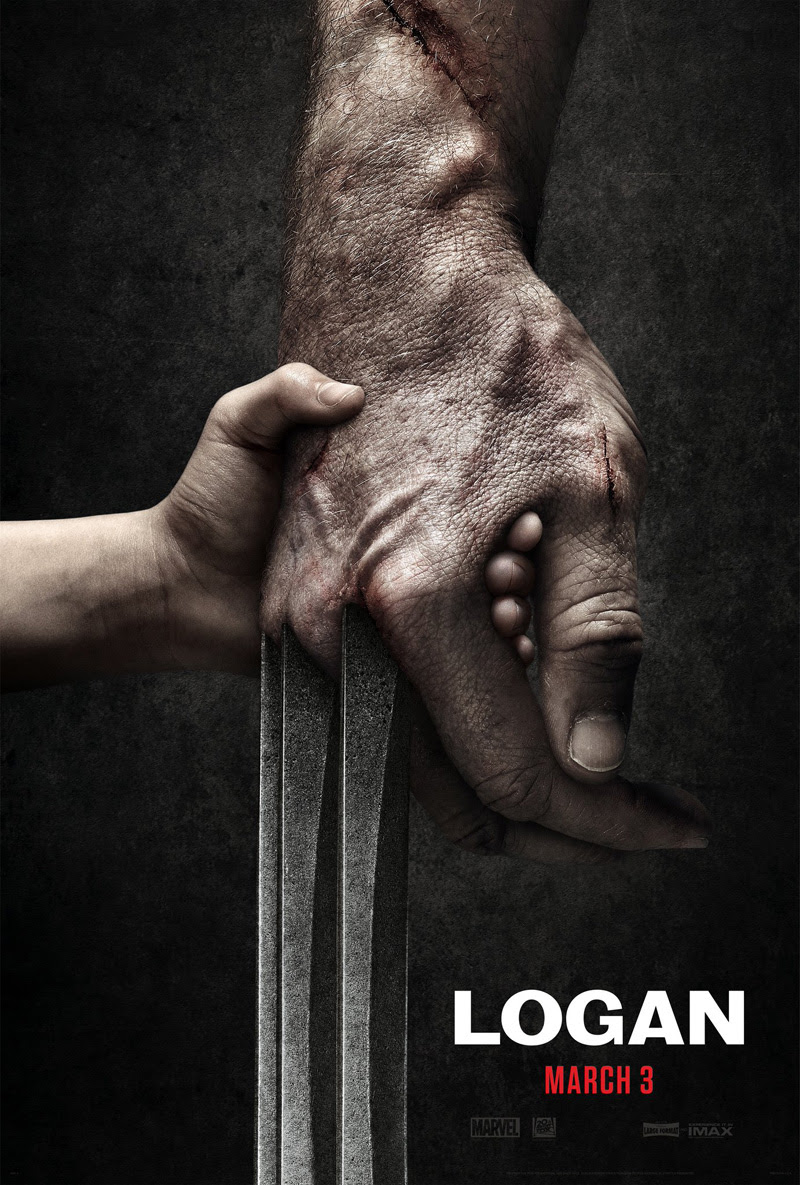 Is Hugh Jackman's final outing as Wolverine the greatest thing since sliced bread, as the critics and fans would have you believe...?

I'll start out by saying that I'm not the biggest fan of director James Mangold's movies. Of his body of film work, I've seen HEAVY, COP LAND, THE WOLVERINE, and IDENTITY, and while I won't say that I don't enjoy his films, it could actually be classified as "Slight enjoyment, with reservations". All of the above-mentioned films have good, even great moments, but they also have moments of almost stultifying boredom, with scenes that meander aimlessly. Mangold, in my mind, is the definition of a journeyman film director....someone who is capable of making solid, workmanlike film, but rarely makes anything that rises above "Eh, it was OK."

Which is what I walked away from LOGAN thinking: Eh, it was OK.

I suspect that the massive accolades being heaped upon this film are part lowered expectations (The cumulative body of Fox's X-films are mainly underwhelming.) and part respect/love for Hugh Jackman and his portrayal of Wolverine. To be sure, Jackman has owned the role, so much so that I pity whoever tries to fill his shoes when Fox inevitable decides to recast the part.

SPOILERS FROM HERE ON....READ AT YOUR OWN PERIL IF YOU HAVEN'T SEEN THE FILM YET!!!

Jackman, as always, shines as Wolverine, especially since he is given free reign to curse and dismember to his heart's content, thanks to this film's R rating, which is well-deserved and completely earned. (As my wife yelled out a few minutes into the film "WHOOOOAAAAA!!! EWWWWW!") The film takes place in 2029, a future without mutants. No new specimens of Homo Superior have been born in years, thanks to a vague plot point involving genetically modified corn, and the X-Men have been wiped out by an Alzheimer's-ridden Professor Charles Xavier's haywire mental powers. Logan, aging and suffering mightily as a result of his own malfunctioning mutant power, ekes out a meager living driving a limousine in Las Vegas, hoping to save up enough money to buy a boat which he can use to flee to the sea with Charles as they live out the remainder of their days together. (The Xavier/Logan relationship is another high point of the film, and hearing the dignified Patrick Stewart curse like a sailor is the greatest thing that I never knew I needed to experience.) Logan's miserable existence is suddenly made even worse, as he and Charles are sucked into the orbit of Laura, a mysterious little girl who has powers (and an attitude...) similar to Logan's.

It wouldn't be an X-Men story without some kind of faceless rabble trying to harm mutants, and here we have The Reavers, vaguely represented by Donald Pierce, a cybernetic-armed sociopath who has orders to bring Laura in, dead or alive. Logan, Charles, and Laura hit the road in the limo,  as they attempt to get Laura to safety in North Dakota, where she will be taken to a possibly-mythical mutant hideaway.

As I said earlier, this is an X-Men film, and, as such, I had low expectations. (High hopes, but low expectations.) The only X-Men film that I'm prepared to say that I thought was excellent was X-2, or whatever the hell it was called. The rest range from truly awful (X-MEN) to vaguely enjoyable (DEADPOOL). I'd put LOGAN on the level of X-MEN 3: THE FINAL STAND, X-MEN: FIRST CLASS, and DEADPOOL: A pretty good film with a lot of flaws.

The flaws include a massively long running time (IMDB lists it as 2 hours and 17 minutes, but it felt much longer.), lack of memorable villains (Richard E. Grant and Boyd Holbrook do their best in thankless, underwritten roles.), and a just-plain-ugly, cheap overall look. (This is an ugly film....MAD MAX: FURY ROAD showed that you can actually make a film set in the desert look good. They could have learned a thing or two from that movie.) There's a massive section in the middle of the film where Logan, Charles, and Laura take shelter with a kindly farming family that was straight out of the Bill Bixby HULK television series from the late '70's, made worse by the film's repeated callbacks to SHANE, which they can't just quietly crib from, they have to beat you over the head with it by showing Charles and Laura watching the film together. All of this farm-life stuff could have been left on the cutting-room floor, and had no impact on the film.

I liked the underdeveloped idea of Logan having to confront a younger, stronger, meaner clone of himself, and the Jackman vs. Jackman fight scenes were a lot of fun, but there's a sameness to all of these films that they're going to have to find a way to overcome. (Most superhero films have a big bad who takes center stage in two major fight scenes, one early on and one during the finale, while the rest or the movie features the hero or heroes battling a faceless rabble of over-matched, identical-looking underlings.....See: THE AVENGERS, THE AVENGERS: AGE OF ULTRON, IRON MAN, IRON MAN 2, IRON MAN 3, GUARDIANS OF THE GALAXY, etc.) The formula works better in some films than others. It wasn't bad here, but by the tenth Wolverine vs. black-clad-cyborgs fight, I was struggling to see my watch in the dark so I could determine when this would all be over. Other major plot annoyances included an Oscar-caliber secret cell-phone video, which just took me right out of the film....How am I supposed to believe that NO ONE in this murderous, top-secret facility saw this woman blatantly walking around filming and interviewing these prisoner children.....?

The much-ballyhooed opening teaser featuring Deadpool was cute, but I certainly can't be the only person who finds Ryan Reynolds incredibly annoying in this role....? A little Reynolds/Deadpool goes a long way.

Posted by The Crabby Reviewer at 1:06 PM