This is the big one, Elizabeth!!!

This crossover hit just as I was getting back into comics after a few years off, and it served as a gateway back into The Marvel Universe, forcing me to buy comics that I had successfully avoided until that point. I ended up staying with a lot of those sampled titles, thus sending me back down the road to collecting-mania.

The ACTS OF VENGEANCE! crossover had a startlingly simple premise: A core group of evil masterminds (Doctor Doom, The Red Skull, The Wizard, Magneto, The Kingpin, and The Mandarin, along with their mysterious "lackey....) pull the strings on a massive coalition of escaped super-villains, directing them to attack heroes that they have never fought before, the thought being that these random attacks by bad guys that they were unfamiliar with would prove to be the undoing of the heroes.

The story starts off in AVENGERS SPOTLIGHT with a prison breakout at The Vault, with only Iron Man and Hawkeye on the scene to stop the exodus. The four issues presented here all do their job nicely, but writer Dwayne McDuffie still can't make these feel like any more than fill-in issues, which is why I never bothered to pick up this book back in the day.

The ten issues of Spider-Man's various titles are among the strongest in this volume, and certainly the most fun. David Michelinie and Gerry Conway handle the scripting, with art by Sal Buscema, Alex Saviuk, Keith Williams, Erik Larsen, Todd McFarlane, and Colleen Doran. These issues represent the "Cosmic Spider-Man" story arc, which finds Spider-Man not only under attack by various and sundry villains, but also coming into possession of mysterious, cosmic-level superpowers. Loads of fun by some great creators, with tantalizing glimpses of some of the great supporting cast and simmering sub-plots that the Spider books were known for.

Crossover architect John Byrne handles the AVENGERS books, which function as the main hub of the crossover, back before Marvel figured out that you were better off having a central mini-series to base these things off of. Byrne puts his two teams through the ringer, having the east coast team lose yet another headquarters, while the west coast team finds themselves short two members, as the Vision leaves to head east, and The Scarlet Witch is abducted by her estranged father, Magneto.

Oddly enough, it is Byrne himself, the mastermind of the whole event, who drops the ball badly in the conclusion. What should have been an epic showdown with the events true puppet-master turns out to be a rushed dud, with Byrne's Immortus and Scarlet Witch sub-plots taking up way too much valuable real estate. The big showdown is concluded by Thor opening up a pit under the bad guy, and then sealing it back up. Wow. Underwhelmed. This issue (AVENGERS WEST COAST #55) is also notable for having an ugly, muddled cover that Byrne composed from interior illustrations in the same issue. Did they have photoshop in 1989, or did he just photocopy the various elements? Sneaky.....

Mark Gruenwald pulls double-duty, writing all of the CAPTAIN AMERICA and QUASAR issues. The CAPTAIN AMERICA issues are phenomenal adventure stories, and it is here that we find the original source of one of the greatest single panels of all time: The "Captain America! I command you to...WANK!" panel!!! 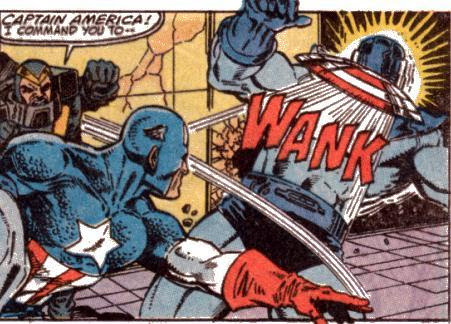 We also get the culmination of a subplot that simmers throughout the crossover: The confrontation between The Red Skull, a Nazi, and Magneto, a concentration camp survivor. Powerful stuff. masterfully, and satisfyingly, handled.


Terry Austin, best known for his inking ability, pens two awful issues of CLOAK AND DAGGER, which are mind-bogglingly bad......All I'll say is this: One of the villains is a new version of The Jester, and he talks like Martin Short's Ed Grimley character: Sample dialogue....
"Oh HAPPY DAY! I suppose this isn't just the BEST public debut a super-villain ever had- in the midst of a veritable BATTLE ROYALE , yet. I couldn't be more EXCITED! And that's no lie!"
He even throws in an "I must say!" Trash...


Another bright spot is the Tom DeFalco/Ron Frenz run of THE MIGHTY THOR. This is a pure throwback comic, with a strong Stan Lee/Jack Kirby vibe. Thor throws down with The Juggernaut, helps introduce The New Warriors, and gets to the bottom of who the crossover's real mastermind is. Turn your brain off, and enjoy the retro vibe.

This was a fun event series. The quality of the crossovers varied, but, taken as a whole, this was a very enjoyable book. In 1989, big crossovers like this were the exception, not the rule, so the creative teams really seemed to give it their all. Your mileage may vary, but ACTS OF VENGEANCE! really was worthy of the fondness I've always felt for it.


Posted by The Crabby Reviewer at 5:20 PM