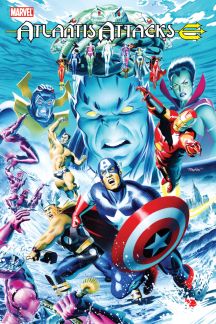 As we near the end of the "Crabs, Assemble!" Avengers binge-read, we take a short detour under da sea....Join me, won't you?

I have to say, I'm getting good and sick of reading nothing (Almost nothing...) but Avengers stories. There are four books left before we reach the end, and they're good ones, but...I'm ready to be done.

Anyway, this was the second crossover to encompass all of the Marvel Annuals, and it's a slightly more coherent read than THE EVOLUTIONARY WAR. The level of talent on board for this event is much better, and you can tell that they actually tried to coordinate the tie-ins this time out. That's not to say that this isn't a (massively) flawed reading experience.

I decided to read the back-up series first this time out, after seeing how the back-up of THE EVOLUTIONARY WAR could have shed a lot of light on the main storyline if it were read first. So....I jumped to the back of the book and started with THE SAGA OF THE SERPENT CROWN, by Marvel historian Peter Sanderson and artist Mark Bagley. Holy Jesus, does this back-up strip have a TON of typos! I don't recall any other vintage Marvel book having anything other than an occasional misspelling or a misused word, which was understandable in the pre-google days.....but the typos in this story were off the chain. Sanderson does a competent, if slightly boring and incredibly overlong, job of distilling the convoluted history of The Serpent crown into one semi-readable narrative. It was amazing to see just how weird guys like Alan Zelentz, Jack Kirby, Steve Gerber, and Roy Thomas were with the original stories that are recapped here.....They published some FREAKY shit back in the day. In the "WTF?" department, Marvel had to trim away at a chapter that contained Conan, but they leave the chapter that features Kull alone. Who knows why...? The end of this series, if read first, mildly spoils the end of ATLANTIS ATTACKS, but you would have seen the end coming a mile away, anyway.

On to the event itself....it's a seriously mixed bag. We start off with the Steve Englehart/Ron Lim SILVER SURFER ANNUAL #2, which finds The Deviant Priest Ghaur restored to life in space, and he's pissed. He fights The Silver Surfer and enlists Atlantean ne'er-do-well Llyra in an overly complicated plot to bring The Serpent God, Set, back to our plane of existence and basically eff us all over.

Next up is David Michelinie & Paul Smith's utterly useless IRON MAN ANNUAL #10, in which Ghaur and Llyra use Hydra as a means to facilitate an Atlantean invasion. This story basically exists to present us with the totally unconvincing "death" of The Sub-Mariner, who, of course, shows up later on. Next!

Through the magic of collected editions, we get a short John Byrne story from AVENGERS WEST COAST #56, that was originally published at a much later date, presented in chronological order. It's a nice, heartfelt little piece that presents the reunion of Captain America and the original Human Torch.

From there. we get another short story, this time from MARVEL COMICS PRESENTS #26. The INCREDIBLE HULK creative team of Peter David and Jeff Purves pit the "Joe Fixit" Hulk against an Atlantean-controlled Killer Whale. Fun stuff.

Fabian Nicieza pens a Firebird short from the IRON MAN annual that features Firebird stumbling across a lost platoon of Atlanteans in the desert. Firebird has more personality in these eight pages than she ever had before.

Next up is the atrocious X-MEN ANNUAL #13, badly written by inker extraordinaire Terry Austin and crudely rendered by Mike Vosburg. Austin should stick to inking, and Vosburg....I don't want to be a hater, but I've never cared for Vosburg's work, even when I was a kid. He does a competent, if old-school-style, job here, but the story, which features a weird CLOAK AND DAGGER villain named Mr. Jyp, is not only awful, but it's barely connected to the event. Next!

The plot grows more byzantine in THE AMAZING SPIDER-MAN ANNUAL #23, when Spidey teams up with the She-Hulk to.....I give up. It involves the body of The Abomination, which is inhabited by the spirit of Tyrannus, who is teaming up with Ghaur and Llyra to transform homeless people into Serpent-Men. This story features grotesque, yet oddly appealing, art by the much-maligned Rob Liefeld. A lot of people make fun of his style, justifiably so, but you have to admit that there really wasn't anybody with a...technique....like his back in the late '80's. His anatomy is horrible, but I still got a kick out of seeing his completely disproportionate Spider-Man swinging around the city.Those skinny legs!!

This homeless Serpent-Men nonsense continues into THE PUNISHER ANNUAL #2, which features Moon Knight, and goes on into THE SPECTACULAR SPIDER-MAN ANNUAL #9, featuring Cloak and Dagger, before mercifully wrapping up in DAREDEVIL ANNUAL #5 (Which was erroneously numbered 4 when it was released!).  I still don't really understand what this homeless people plot was supposed to accomplish, but it is never mentioned again. Next!!!

Things heat up in AVENGERS ANNUAL #18, which finally gets Atlantis into the mix for real. THE NEW MUTANTS #76 is next, and it takes place before any of the annuals, and probably should have been the first story in the book, since it isn't really clear WHEN it takes place until the end, and by then you've been reading about The Sub-Mariner, who you're supposed to think is dead, but then you read this and think he's alive, and then you realize "Oh, this takes place BEFORE he died!", then you go back to fake-believing that he's dead again. Next!

Or maybe not, because next is THE NEW MUTANTS ANNUAL #5, featuring more Rob Liefeld art, and a totally incomprehensible Louise Simonson story. I had no idea who most of these characters were when the story started, and Simonson did nothing to rectify that. This was a true low point of the book. Thankfully, Fabian Nicieza comes in for the save with a short story about Andromeda, Attuma's daughter, which leads into....

...the John Byrne/Walter Simonson collaboration from X-FACTOR ANNUAL #4, one of this collection's high points. Ghaur has abducted Marvel Girl, in order to make her one of the "Seven Brides of Set". (One bride per head.) The Beast tags along to attempt a save her. Byrne on pencils and Simonson on inks is an oddly appealing combination, and their Attuma/Andromeda throwdown is almost worth the price of admission alone. (This is where I throw in my obligatory "It's not Attuma!" joke. Say it in an Arnold Schwarzenegger voice for added hilarity!)

WEB OF SPIDER-MAN ANNUAL #5 finally gets to the meat of this whole crossover: The Atlantean invasion of the surface world. Spidey and The Fantastic Four are on the front lines, and it's good stuff. The real highlight of the collection is AVENGERS WEST COAST ANNUAL #4, however. Written and penciled by John Byrne, with his dream-team inker Terry Austin backing him up, this story left me scratching my head and wondering: If they had the great John Byrne on board writing and illustrating two of the annuals in this crossover, why not make it THE LAST TWO, and let a crowd-pleaser wrap the story up?  Byrne covers an amazing amount of ground, and actually manages to pull a lot of loose ends together, before ending on a major cliffhanger and handing the last two annuals (THE MIGHTY THOR ANNUAL #14 and FANTASTIC FOUR ANNUAL #22) over to.....

ARE YOU FUCKING KIDDING ME?

Aside from his CONAN work, I find Roy Thomas to be unreadable. Your mileage may vary, but I was horrified to see his name in the credit box in these two issues. (Now, mind you: I read all of these books in 1989, so I already KNEW that the ending was going to suck. And I was STILL disappointed.) These issues weren't as terrible as they were to me the first time around, mainly because Thomas won some goodwill by having Ben Grimm (The Thing) crack a very funny joke about Ghaur being a "Deviant". After five reruns of the same joke, that goodwill evaporated. The final battle is interminably long, and ends with a "WTF???" moment, because you will have no idea what happened and who two of these Deus Ex Machina characters are  unless you READ THE BACK-UP STORY FIRST. If you take nothing else away from this review, let it be that: read the back-up story first.

The extras are slim pickings: A house ad, an illustrated John Byrne apology for a continuity gaffe, a Rob Liefeld pin-up, an OFFICIAL HANDBOOK OF THE MARVEL UNIVERSE profile of Set, and a few pages of Mike Mayhew's cover process, from sketch to painting.

I've read worse crossovers in my time. There is a certain charm to these 1980's Marvel books that will always provide me with some entertainment, no matter what. I wouldn't necessarily recommend this book, but I wouldn't tell you to avoid it, either. Go in with low expectations, go with the flow, and have some fun.


Posted by The Crabby Reviewer at 5:19 PM