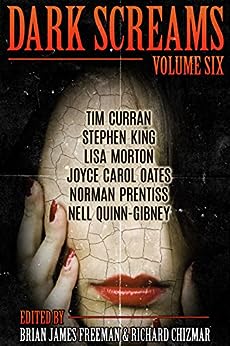 The DARK SCREAMS anthology series is back with a new volume, headlined by a rare Stephen King short, and anchored by a staggeringly good Novella by Tim Curran, who gets top billing on the cover.

There are six stories this time out, and the book opens with Stephen King's Edgar Allan Poe pastiche/rip-off THE OLD DUDE'S TICKER. This short tale is more of a curiosity than anything else...King wrote this in the early '70's, and I imagine that he was as high as a kite when he decided to update Poe's THE TELL-TALE HEART with a crazed Viet Nam vet as the main character. A decade ago, I moved heaven and earth to find a copy of this story, so I'm glad that its available in a more accessible format now, but this is really nothing more than Poe's story with '70's slang. There's nothing here except King's name and the novelty factor. It is a good get for the DARK SCREAMS series, and it'll probably help sell a lot of e-books, so there's that.

This is followed by Lisa Morton's THE RICH ARE DIFFERENT, which finds a young female writer being invited to meet the wealthy family that was the thinly-disguised subject of her last best-selling novel. I've been beating the drum for Morton for a long time now, and she delivers again with this story. I've never read anything by Morton that disappointed...she really is an unsung hero of the horror genre, especially with her short fiction.

Nell Quinn-Gibney's THE MANICURE is a well-written story, but occupies a lot of real estate in the book, and has very little payoff. The ending is so sudden and understated that I had to read it again to see if anything actually happened. Quinn-Gibney is a talented writer, but this story needed some serious trimming.

Norman Prentiss contributes a creeping, quiet horror tale titled THE COMFORTING VOICE, a seemingly uplifting story about a terrible father trying to change his ways and mend fences with his grown daughter after she gives birth to a daughter of her own. I had no idea where this was going, and the end really crept up on me. Solid work from Prentiss, as usual.

Joyce Carol Oates is represented by a 1994 short story, THE SITUATIONS, which I did not understand at all. It's short, so I was able to read it twice before I definitely concluded that there was no reason for this story to be written, or read. Tastes vary, of course, but this did nothing for me.

The bulk of the collection is taken up by Tim Curran's excellent reprint THE CORPSE KING, which was previously printed as a stand-alone volume of Cemetery Dance's Novella series. Curran's story concerns a pair of London grave-robbers named Samuel Clow and Mickey Kierney, who discover that there are things worse than "resurrectionists" prowling the deserted churchyards at night. The supernatural element drives the story, but the bulk of Curran's narrative concerns itself with the day to day affairs of Clow & Kierney's grim business, and the hopelessness of London's slums. To be sure, these are not pleasant characters, but it's hard not to sympathize with these men, who are no more than products of their horrific upbringing. Curran brings the squalid slums to vivid life, making the everyday affairs of Clow & Kierney every bit as riveting as the graveyard scenes. This edition is missing the beautiful interior illustrations by Keith Minnion that graced the print version of the novella, but I can't recommend this story highly enough.....It's more than worth the price of the collection by itself. I was ever-so-slightly disappointed by the end of the story, but that's more down to my exacting monster-story standards than any fault of Curran's. The story didn't go where I expected it to, which, in retrospect, is probably more of a plus than a minus.

Posted by The Crabby Reviewer at 11:56 AM