Like Unto a Thing of Iron, Part Four: Essential Power Man and Iron Fist, Vol. 1 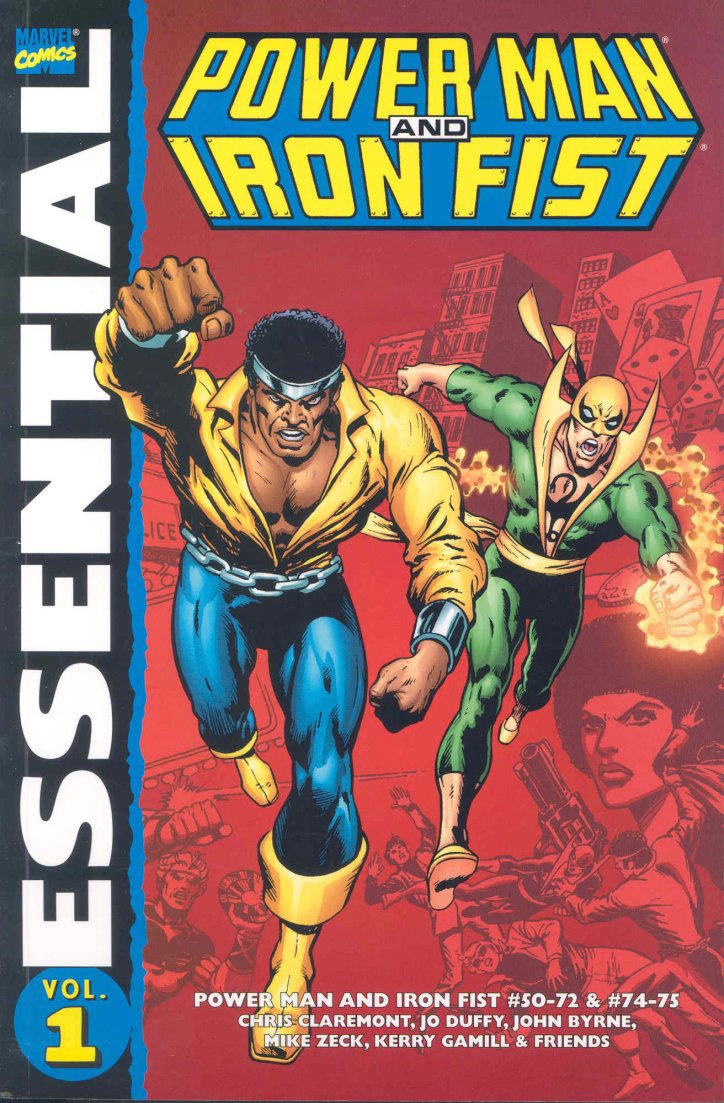 Sweet Christmas!! A book from my childhood that actually holds up!

The book opens with Chris Claremont helming the series, but he moves on fairly quickly, giving way to Ed Hannigan. Claremont provides a nice issue establishing Luke Cage and Danny Rand as a team, but his remaining three issues feature a ridiculous plot about Robot pimps and drug dealers, so...I wasn't too sad to see him go. Ed Hannigan doesn't fare much better, contributing two forgettable stories about a bank robber and a group of car-show crooks. This is just filler before the main event, the reason why I bought this book...Mary Jo Duffy.

Duffy takes over as writer with issue #56, and the way she handles the Cage/Fist dynamic, as well as their supporting cast, is nothing short of magic. She doesn't really hit her stride until #61, where the creative team I grew up with finally comes together. Penciler Kerry Gammill and inker Ricardo Villamonte gel perfectly with Duffy's slightly comedic take on the characters, and it was easy to see why I loved this book so much as a kid.

I remember some great debates that happened at lunchtime at P.S. 105 in The Bronx...Was it OK to like a comic written by...shudder...a girl? It was a close thing, but, in the end, we all agreed that she wrote a pretty good super-hero book, especially for a female. This book paved the way for comics like Giffen & DeMatteis' JUSTICE LEAGUE, and was unique in its day...it was rare indeed to find a comic book that didn't take itself so seriously. Duffy kept the tone light, and delivered a lot of seemingly done-in-one stories that rewarded careful reading. Often, plot threads from older stories would be crucial to later issues, such as issue #66, which finds Nightwing Restorations hired to locate a jade tiger statue. Although this seems to be a done-in-one story, it would figure heavily in issues 74 and 75, and the duo of Constrictor and Sabretooth, who are on hand to guard the jade tiger, would come back with a vengeance much later on in the series. Duffy's long-term plotting made this a fun read from month to month, and it enables the series still hold up nearly 40 years later.

Kerry Gammill's art is a thing of beauty, especially when inked by Villamonte. (A lot of the issues are credited to Villamonte, but you can distinctly see changes in the art about halfway through the issues...I assume Villamonte either had problems with deadlines, or had studio-mates pitch in occasionally.) The detail in Gammill's pencils is amazing...Why this man was not a bigger star at the time is beyond me.

If you like a good buddy/adventure story, this is the book for you. The interplay between the mismatched duo of Cage and Iron Fist is priceless, the action is fast and furious, and the book is just plain FUN. I'm taking a break from the series before I read the next volume, but I'm really looking forward to it. Highly recommended stuff.