A strange oddity from over three decades ago.

MARVEL GRAPHIC NOVEL #22: THE AMAZING SPIDER-MAN: HOOKY was released in 1986, during what I think of as "The Missing Years". I was pretty much absent from comic-book collecting from 1985-1988, so when I got back into the hobby in mid-1988, I spent years stumbling across books that I had no idea existed. This was one of those amazing finds.

I spotted this beauty behind the counter, and coveted it for weeks. (Bear in mind, my seventeen-year-old self wasn't exactly swimming in cash.....It was all I could do to afford a handful of new titles each week, let alone an back-issue indulgence like this, which cost almost as much as the rest of my weekly haul combined! $5.95!! When new comics were going for .75 each!!) I finally managed to scrounge together the cash, and I rushed home with my treasure to find....that it really wasn't that good.

A few years ago, Marvel offered an insane amount of digital copies of first issues for free on Comixology, and this was one of the offerings, so I figured a reread was in order. And did the book fare any better thirty-one years after that first reading?

A lot of that can be attributed to the author, Susan K. Putney, and the subject matter. There isn't much out there about Putney; She appears to have authored a Sci-Fi novel in 1972, and she owned a comic shop, and that's all I could find, aside from this graphic novel. Putney does a decent job of channeling Spider-Man's voice, but the rest of the book is pure fantasy, a genre that I'm not much of a fan of.

The story finds Spider-Man stumbling across a little girl who seems to know his secret identity; He soon finds out that she knew him as Peter Parker when he was a little boy, and knew his Uncle Ben. The girl, Marandi Sjorokker, is the dimension-hopping daughter of an evil wizard, cursed to stay perpetually twelve years old physically, and she needs Spider-Man's help against a monster known as The Tordenkakerlakk, or "The Thunder Cockroach". She whisks him off to another dimension, where they.....snooore....uh, what...? Sorry, dozed off for a second. I really hate stories like this.

The saving grace...? The gorgeous art of the late, great, much-missed Berni Wrightson. Look at some of his staggering work from this book: 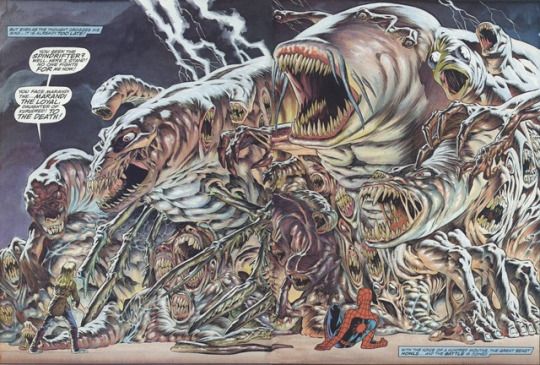 Beautiful stuff. Wrightson excelled when illustrating monsters, and he has a doozy of a monster here. A shape-shifting beast that assumes a new form after every defeat, each one nastier than the last. While I wasn't particularly enthralled by the story, Wrightson's art more than made up for it. His comic-book work was rare, but it was always a treat, and the book is worth buying just to drool over his work.

MARVEL GRAPHIC NOVEL #22: THE AMAZING SPIDER-MAN: HOOKY crawls away with a gross seven out of ten Thunder Roaches:
🐛🐛🐛🐛🐛🐛🐛

Posted by The Crabby Reviewer at 7:37 PM