To Infinity...AND BEYOND!, Part Six: The Infinity Gauntlet Prologue 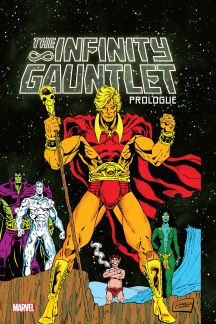 I told you I'd get back to this series of reviews someday.....

And, as the big-screen adaptation of THE INFINITY GAUNTLET is coming in a little over 24 hours, could there be a better time to dig back into Jim Starlin's cosmic epic?

THE INFINITY GAUNTLET PROLOGUE is the first of twelve hardcovers included in THE INFINITY GAUNTLET BOX SET, and, since I just reviewed all of the contents less than two years ago, you may be asking yourself "Why did he buy this box set?" Because, in the immortal words of JUNK FOOD FOR THOUGHT's Kris Shaw, I hate my money. I mean, honestly, who could resist this set??? (I guess a lot of people could, but I couldn't.)

You can get a breakdown of my thoughts on this volume's content HERE, but let the buyer beware: This massive set gets off on the wrong foot by committing the same sin that THE INFINITY GAUNTLET OMNIBUS did, which is omitting the bulk of THE SILVER SURFER #'s 41-43, which chronicled The Surfer's confinement in Dynamo City. (Issue #39 is also omitted, but that was a fill-in issue by a different creative team, so....your mileage may vary, but I didn't miss that issue too much.)

The missing issues don't contribute much to the overarching INFINITY GAUNTLET storyline, but I would argue that they are essential reading because they are written and illustrated by Jim Starlin and Ron Lim, tell a story that spins out of Thanos' treachery, and provide a crucial building block in the creation of the new outlook and personality that Starlin was trying to imbue The Surfer with. There's a text recap page that fills in the missing issues, but....for a $500.00 MSRP, I don't expect issues to be missing. There are six pages of black filler in this volume, and they reprint five pages of THE SILVER SURFER #42, plus there's the recap page.....Adding the missing issues would have put about 55 extra pages in this book. That shouldn't have been a dealbreaker. If those issues had been included, this would have been a definitive collection of all of Jim Starlin's work on THE SILVER SURFER. (Annual #3 is also mostly missing, but don't get me going on that.) There's a SILVER SURFER EPIC COLLECTION coming in late 2018 that will include the Dynamo City issues, so those issues will soon be collected for, I believe, the first time. But they should have been collected here.

Posted by The Crabby Reviewer at 2:44 PM