Fables: Werewolves of The Heartland 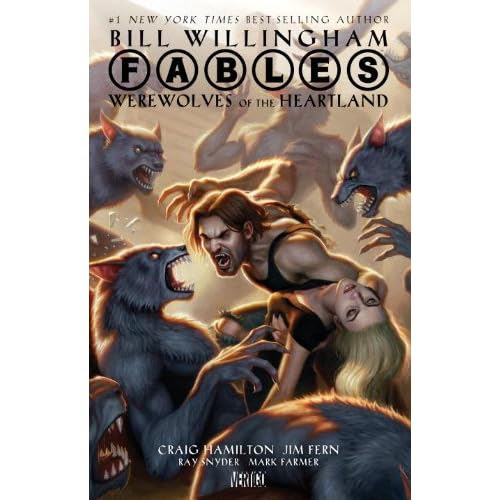 I've been a fan of FABLES creator Bill Willingham since his aborted COVENTRY series back in the dark ages. (Also known as the 1990's.) I loved FABLES, and studiously bought all of Willingham's other DC Comics work, but quickly discovered that ROBIN, JUSTICE SOCIETY OF AMERICA, SHADOWPACT, etc........well, they all sucked. It seemed like Willingham was saving his magic for FABLES, and almost everything else was work-for-hire that didn't warrant his special attention. (He was full-on with PROPOSITION PLAYER, though, another DC/Vertigo book that I highly recommend.) As you read this Blog, you will learn that I am years and years and years behind in my comic reading. I try to read new stuff, so as not to fall FURTHER behind, but the oldest comic sitting in my "To be read" pile is over eight years old. The point of that digression is this: While I loved FABLES, I haven't read very much of it. Yet. I own it all, I just haven't gotten past issue 20 or so.

I hope the 100 issues I still have in the pile (To say nothing of 50 issues of JACK OF FABLES, the first collection of FAIREST, and 3 issues of THE LITERALS....) don't all suck as hard as FABLES: WEREWOLVES OF THE HEARTLAND did....

Before you say "He hasn't kept current with the series! Maybe he didn't understand it!", well....True, I'm NOT current with the series. But in the time-honored standalone graphic novel tradition, F:WOTH (I'm far too lazy to type out that whole title again....my Carpal Tunnel Syndrome is acting up!) features a hazy connection to the continuity/timeline, and serves up an adventure that starts and ends here, and will never be mentioned again, unless it's as an in-joke. ("This is almost as bad as that time when I had to fight a town full of naked Werewolves!") I'll get to the naked Werewolves in a bit....

Anyway, the plot finds Bigby Wolf looking for a new place for The Fables gang to call home. He finds a town filled with Werewolves.They talk a lot, then he savagely (and hilariously!) kills a ton of them, before saying "Kumbaya", and leaving them in peace as he walks into the sunset, like a Lycanthropic Bruce Banner. (Cue the piano music!) Aside from a bland, toothless (Ha ha!) plot, the art ranges from OK to atrocious, and the coloring is so dead and flat it looks like it came from a 1970's Charlton comic. And HOLY SHIT! Remember when DC refused to publish a thoughtful, well-crafted Rick Veitch story where Swamp Thing met Jesus? (Which they STILL haven't published!) Well, rest easy, because thanks to those First-Amendment pioneers at DC/Vertigo, you can now publish page after page of Werewolf cock!

Yes, there's also Human cock, but you've seen that before! But have you seen Werewolf cock? Bet you haven't! Well, cross that off of your "Bucket List", because DC delivers!

They also continue their decades-long streak of delivering almost totally unremarkable original graphic novels. This is a real disappointment, and seeing as how it'll have no bearing on continuity (I think! I could be wrong, I suppose....), it's probably safe to take a pass on. Unless, you know, you really want to see Werewolf Penis. If that's the case, go for it! DC/Vertigo provided a review copy.

Posted by The Crabby Reviewer at 5:37 PM